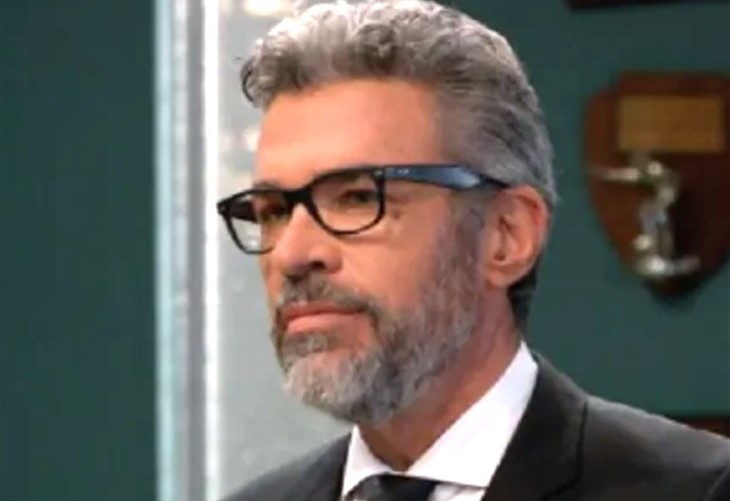 General Hospital spoilers for Friday, February 4, 2022, reveal another prison break on the PCPD’s watch. Jordan Ashford isn’t even the police commissioner anymore and they still can’t get things right as Peter August foils the good guys once again.

General Hospital Spoilers – Who Will Be Peter August’s Next Victim?

Mac Scorpio (John J. York) and Dante Falconeri (Dominic Zamprogna) should have known that Peter (Wes Ramsey) would have tried to pull an escape while they transported him to prison, but they weren’t ready for what he had in store, including a van with four slashed tires and some sort of package from Victor Cassadine (Charles Shaughnessy).

As shots ring out on the side of the road, Felicia Scorpio (Kristina Wagner) and Anna Devane (Finola Hughes) anxiously wait for word on whether Peter got to the prison or not, while Anna still tries to figure out what actually happened to Valentin Cassadine (James Patrick Stuart).

Meanwhile, Maxie Jones (Kirsten Storms) is relieved that Austin Holt (Roger Howarth) finally knows the truth and she can finally stop lying to him. The problem is, he wonders if their last kiss was also just a diversion to keep him from asking more questions.

Over at Jax’s old house, Brook Lynn Quartermaine (Amanda Setton) and Harrison Chase (Josh Swickard) discuss the vow renewal they just attended, as well as life, love, and romance. Chase tells her sometimes people just belong together. And sometimes people better go upstairs and check on a baby because a cartoon villain madman who can’t be killed no matter how much people try is on the loose.

Carly Corinthos (Laura Wright) just can’t stay away from that bridge that belonged to Robin Scorpio (Kimberly McCullough) and Jason Morgan (Steve Burton) because anything that belonged to Jason that didn’t involve her now somehow belongs to her. And there’s Drew Cain (Cameron Mathison) again, ready to listen to all of Carly’s problems because if Carly is on, someone has to be there to listen to her kvetch.

As Carly whines about Nina Reeves (Cynthia Watros), Sonny Corinthos (Maurice Benard) still has grand plans for her aboard The Haunted Star. Kristina Corinthos (Lexi Ainsworth) encourages her dad, but it looks like Carly may not show. Stay tuned to General Hospital weekdays to see how these stories play out.