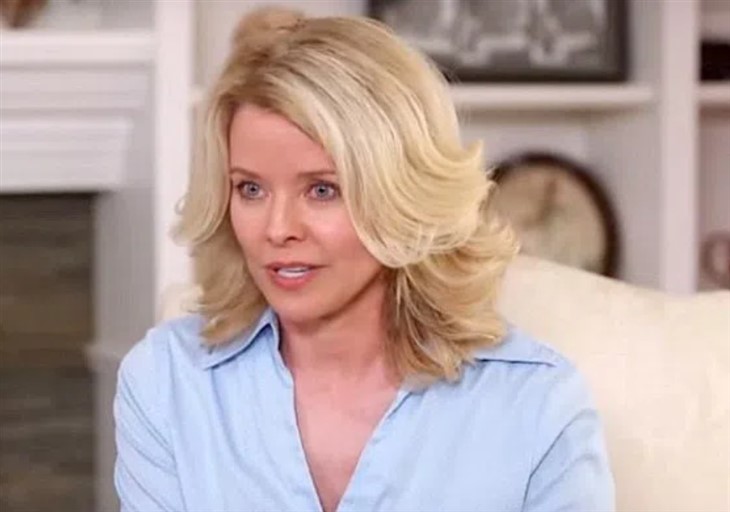 General Hospital (GH) spoilers tease viewers will be seeing a lot more of Felicia Scorpio (Kristina Malandro) in the coming weeks. Felicia has only appeared once in the past year, when Sean Donnelly’s ( the late John C. Reilly) friends and family gathered to pay their respects to their fallen friend. But all of that is about to change, although it may put Maxie Jones (Kirsten Storms) in an impossible situation!

Peter August (Wes Ramsey) is still in love with Maxie, even though she made it clear that she wants nothing to do with him. Peter had planned to force Dr. Leisl O’Brecht (Kathleen Gati) to brainwash Maxie into believing she was still in love with him. But Leisl was rescued and Peter is currently in prison. But Peter seems to have a plan, and will likely escape soon. So what’s his next move?

One way that Peter might seek to get Maxie’s cooperation is through her mother, Felicia. If Peter takes Felicia hostage, Maxie may have no choice but to agree to Peter’s demands even if it means giving herself to him. It’s a disgusting choice she would have to make, but Maxie may feel backed into a corner. But Peter may not realize that Felicia is much more than Maxie’s mother. She’s been in plenty of situations much worse than this, and may be the one to save Maxie once and for all.

Peter has only seen that Felicia is a doting grandmother and happily married to Mac Scorpio (John J York). But before she settled down with Mac, Felicia was quite the adventurous soul. She has been placed in many dangerous situation before. Viewers may recall that Ryan Chamberlain (Jon Lindstrom) was once with Felicia as Peter is with Maxie. She can handle herself and may turn the tables on Peter. And after everything that Peter has done to Maxie, Felicia may just be the person to rid the world of Peter August for good.

Will Peter take Felicia hostage? Will Maxie be forced to give herself to Peter? Or will Felicia turn the table on Peter, possibly finishing him off for good? Anything can happen in Port Charles so stay tuned to General Hospital airing weekdays on ABC. And don’t forget to check back right here regularly for all your General Hospital news, information and spoilers!

Days Of Our Lives Spoilers: Sami Brady May Want To Kill Nicole

GH Spoilers: Leo’s First Appointment, Will He Be Diagnosed Autistic?