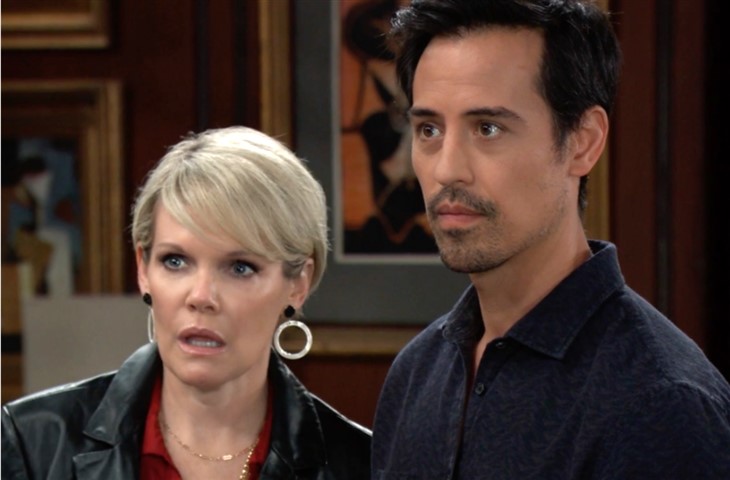 General Hospital (GH) spoilers and updates reveal Ava Jerome (Maura West) thinks that distancing herself from Nikolas Cassadine (Marcus Coloma) will force him to get rid of Esme Prince (Avery Kristen Pohl). However, Esme is making a play for Nikolas and Ava will discover that. Will Ava be able to stop Esme in her tracks?

General Hospital’s Ava will catch onto Esme’s plan to go after Nikolas. Esme is trying to pull closer to Nikolas now that Spencer Cassadine (Nicholas Chavez) refuses to renew their romantic relationship. Esme wants to come between Ava and Nikolas because Ryan Chamberlain (Jon Lindstrom) ordered her to do so. However, Esme has no idea that Ava is onto her. Esme is convinced that she will break up the couple so Ryan can have Ava. Unfortunately for Esme, Ava knows every trick in the book and has used most of them. Once Ava catches onto Esme’s plan, she will pull closer to Nik instead of pushing him away. Will Ava’s plan work to expose Esme?

General Hospital’s Ava doesn’t realize it, but pulling toward Nikolas could put his life in danger. Ryan wants Ava back and he would not hesitate to kill Nikolas to get that. Of course, Ava would never take Ryan back after he killed her daughter. Ava has already tried to kill Ryan once. Ava would not think twice about saving Nikolas from Ryan no matter what it cost her. However, Ryan could be just as determined to kill him.

General Hospital’s Ava is onto Esme and Spencer is as well. Ava and Spencer could even join forces to take Esme down. Will Esme lose her patience and go after Ava herself? After all, if Ryan is truly Esme’s father, she could have his killer tendencies. Will Esme try to kill Ava and possibly die at Ryan’s hands because of it? Could Nikolas or even Spencer be forced to kill Esme to save Ava’s life? Esme has already blown up Ava’s car. Avery Corinthos (Ava and Grace Scarola) has been targeted as well. Who else could be pulled into the mix before Esme is finally stopped? Will the truth about Ryan and Esme be exposed before Esme’s plan succeeds?

Esme has become Ryan’s puppet and that puts everyone in danger. Will Ava and Nikolas survive Esme’s interference? Will Esme finally pay for all of her dirty deeds?