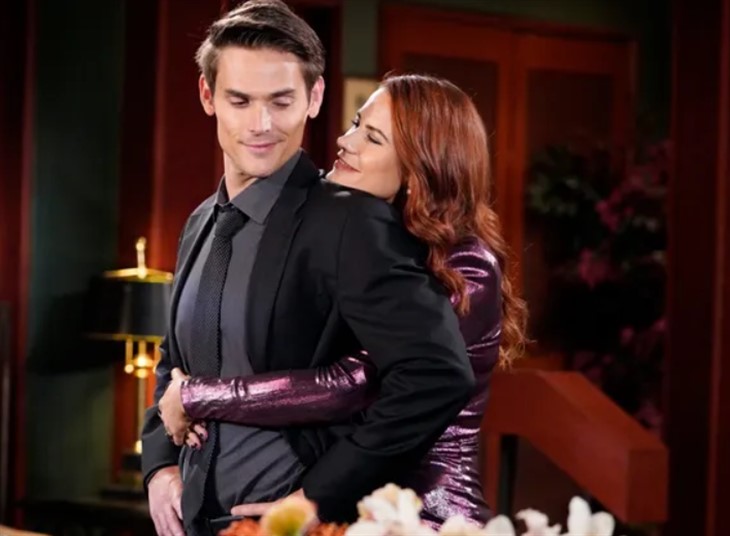 The Young and the Restless spoilers reveal that Sally Spectra (Courtney Hope) and Adam Newman (Mark Grossman) seem to have everything going for them right now. They are madly in love with each other. They are climbing up the ranks in the business world, although Adam is aware it could be temporary. This couple is due for conflict, so what tests their relationship?

The Young And The Restless Spoilers – Relationship Going Perfect

Y&R spoilers reveal that Sally and Adam’s relationship seems to be going perfectly right now. They are getting along great, enjoying plenty of passion, exchanged the “L” word, and don’t seem to fight. Even though it sounds like they are the perfect match, no romance is without conflict, especially in soaps.

In addition to Adam and Sally enjoying the perfect romance, they are both doing well professionally. Sure, Adam has his issues with his family. However, he has been allowed to bring Sally on at Newman Media with the COO title. Now that Adam is being used at Newman Enterprises to lure Victoria Newman (Amelia Heinle) home, Sally got a huge promotion as well.

Even though Adam knows this job might not last long, he is determined to prove he’s the better CEO. So, Adam and Sally’s professional lives are going pretty smoothly right now, too.

With both their careers and personal life going well, that means they are ready for some kind of major shakeup. What could test Sally and Adam’s relationship? Will it be something in their jobs, relationship, or both?

The Young And The Restless Spoilers – Victor Newman’s Scheme

The Young and the Restless spoilers reveal that Victor is determined to get Victoria home and away from Ashland Locke (Robert Newman). Victor thinks that Adam becoming the CEO of Newman Enterprises will infuriate Victoria enough to bring her back.

However, Victoria has another plan. Victoria doesn’t plan to make a fuss out of Adam being CEO as she believes he will mess it up on his own. Instead, Victoria is going to launch a new company that will directly compete with the family business. This will put a lot of pressure on Adam as he tries to prove that the company, he is currently running can beat the competition.

The only problem with that is Victoria knows what her father is going to do before he actually does it. When Victor applies more pressure on Adam, he could take out his frustrations on Sally.

Another obstacle that could affect Sally and Adam’s relationship is Chelsea Lawson (Melissa Claire Egan). A few weeks ago, Adam tried to make sure that Chelsea was okay after Rey Rosales’ (formerly played by Jordi Vilasuso) death. Chelsea made assumptions and snapped at Adam. Then, Chelsea was rescued by Kyle Abbott (Michael Mealor).

It is teased that Adam will once again try to help Chelsea. If Chelsea is a little more receptive – or if she knows Sally is watching – this could cause some insecurity and jealousy.

Do you think that Adam and Sally are just too perfectly synched right now? Is there relationship due for a major roadblock? What do you think tests their relationship and what will be the outcome?