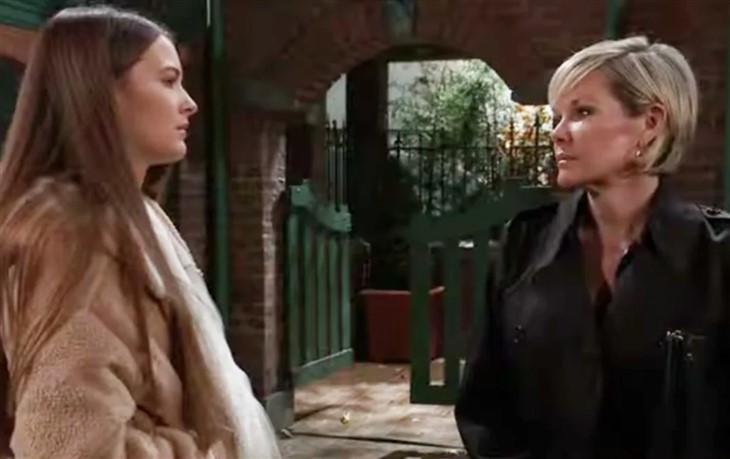 General Hospital spoilers reveal that stunt doubles have leaked what happens after Nikolas Cassadine’s (Marcus Coloma) betrayal is discovered. Fans can expect a violent showdown between Esme Prince (Avery Kristen Pohl) and Ava Jerome Cassadine (Maura West). Keep reading to get all the details on what’s coming up in the ABC soap!

GH spoilers reveal that Nikolas and Ava have been going through troubled waters for a while. Of course, this is all due to Esme. If Esme isn’t the one creating the friction, she’s indirectly causing it.

Fans expected Esme to seduce Nikolas. However, something unexpected happened when it was Nikolas who kissed Esme first. Then, fans watched in horror as Nikolas and Esme went to bed together.

The two were almost caught by Ava and Spencer Cassadine (Nicholas Alexander Chavez). However, Esme slipped outside wearing nothing but her underwear while Nikolas tried to cover with Ava.

Fans later learned that Esme is holding onto the secret, but just for now. Esme told Ryan Chamberlain (Jon Lindstrom) that she’s waiting for the perfect time that will cause the maximum damage. Esme assured Ryan that when she exposes the truth, there will be no repairing Nikolas and Ava’s relationship.

General Hospital spoilers reveal that Eden McCoy (Josslyn Jacks) shared a photo on social media. The image suggests that stunt doubles that look like Ava and Esme will be involved in a violent brawl. So, it sounds like when Ava finds out about Nikolas’ betrayal, she will go after Esme physically.

There is speculation that Esme could be pregnant with Nikolas’ baby. If that turns out to actually happen, that might make Nikolas step in to protect Esme. It will definitely cause some major complications, that’s for sure.

Fans are anxiously waiting for Esme to be exposed but not just for her sleeping with Nikolas. Trina Robinson’s (Tabyana Ali) name still needs to be cleared. Every opportunity to get to the truth seems to be blocked by Esme. When Ava unleashes her wrath, will Esme even survive? We will have to keep watching the ABC soap to find out what happens with this storyline.

What do you think is going to happen when the truth about Nikolas and Esme’s moment of passion comes out? Will Ava physically attack Esme and how will Nikolas deal with the fallout? Could Esme be pregnant with Nikolas’ baby and will she survive the consequences of her actions? Share your thoughts and remember to keep watching the ABC soap to see what happens next.

Y&R Spoilers: Chelsea And Chloe Clash — How Bad Will It Get?