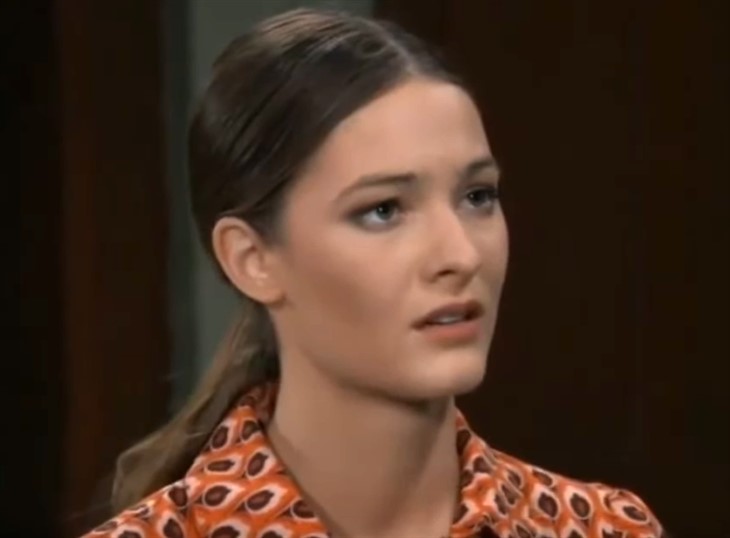 Esme implied that she was no longer attending Port Charles University a few weeks back when she mentioned she getting a Title Nine warning while talking to someone at Kelly’s. This had been around the same time that Trina Robinson (Tabyana Ali) got her Title Nine warning, which seemed suspicious!  Yet, Esme showed up at GH as Ryan’s therapist when he was brought in for medical testing, appearing to have gotten Harmony Miller’s (Inga Cadranel) job while still interning.

The internship had been through the school, so it seems suspicious that Esme was assigned by a doctor at Spring Ridge to attend to Ryan at GH! Esme will use her dubious internship at Port Charles University to trick Kevin into giving her info on Ryan, too.

Back to that confrontation in the examining room with Felicia, after Felicia gave Esme warnings about Ryan after telling her their history, Esme became suspicious of Ryan! She knew who Felicia was, Ryan obviously telling her about him and Felicia’s past but told him he’d left out a lot! Esme had her doubts and didn’t know who to believe, but with Felicia’s warnings it seemed she believed her-why would she warn her if it wasn’t true? Ryan again grabbed Esme’s wrist, a sign of his displeasure and squeezed it hard, and Esme had pulled back; she’d seemed particularly disturbed about the bomb at the wedding. Esme also seemed disturbed about Felicia’s telling her that Ryan had tried to kill her on several occasions and that he’d kill her too when he was done with her!

Esme is obviously scared enough by what Felicia told her about Ryan to want to check it out; the only person she knows of that could verify it is Kevin. However, she doesn’t want Kevin to know that she’s his niece and he obviously doesn’t know that Spring Ridge overrode his restrictions against letting Esme near Ryan. It appears that with Harmony’s death they were shorthanded and let Esme have her position since she had learned the blinking code communication method.

Esme doesn’t want to let on to Kevin that she’s caring for Ryan as his therapist now either, so she has to come up with something believable. She tells him that she has a chance to get into a prestigious psychology program at school, and she asks his help – her future depends on it!

Esme knows there is information aplenty on Ryan from a criminal standpoint, about his crimes, and plenty of theories on his motivations from a criminal profiler standpoint. But Esme wants an edge to get into this program, which is very difficult to be approved for and what better place to get it than from his own brother! That way she can ask Kevin plenty of questions about Ryan regarding his days stalking Felicia, and tells him she doesn’t want to bring up horrible memories for the lady. Esme tells Kevin that she has to submit her own case study and hasn’t done enough in depth work at Spring Ridge so she’s asking for his help. This way Esme doesn’t have to try to talk to Ryan himself to get the information, or talk to his victims; will Kevin help her?

B&B Comings And Goings: A Cameo Appearance Dishes, A Fan Fave Is Back On The Case