B&B Spoilers: What’s Next For Finn And Steffy 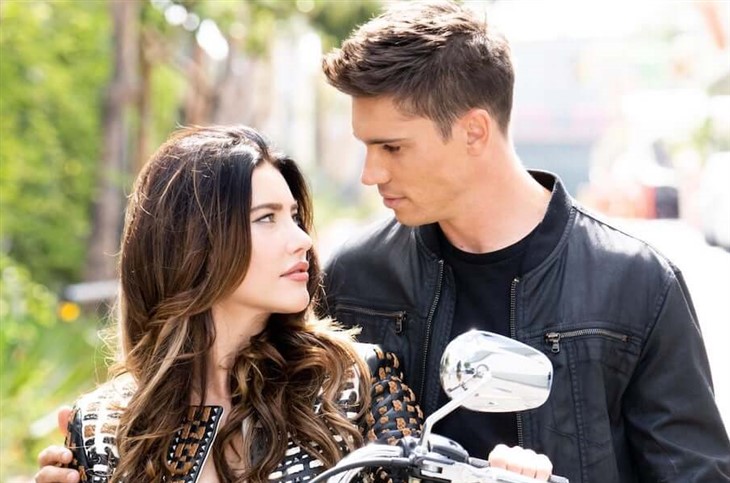 The Bold and the Beautiful spoilers document that John Finn Finnegan (Tanner Novlan) and Steffy Forrester Finnegan (Jacqueline MacInnes Wood) are about to realize one of the more anticipated reunions in recent B&B history. Steffy must know that Finn is not dead and that he is determined to present himself as the reveal in Monaco.

The writing staff has cleverly stretched his reunion beyond what could have been a simple phone call. Taylor Hayes (Krista Allen) and Ridge Forrester (Thorsten Kaye) could have relayed the news to Steffy after arriving at the mental health facility. But neither happened on purpose.

So, Steffy will see Finn, in what initially appears to be a dream-like event, on B&B. All will be righted in their world. Then what?

Devoted B&B fans know that Steffy and Finn met after her second motorcycle accident. Steffy was riding distracted that day.

Would she have been as badly hurt in a car? Probably not. But not riding, driving, running, or walking at all would certainly have prevented her from being in the intersection where Bill Spencer (Don Diamont) just happened to be approaching.

The cliched journey from when Steffy awoke and saw Finn standing at the foot of her bed to the exotic location shoot setting where she sees her assumed-dead husband has been long. Daytime fans also know that the writing has been great, and the actor’s performances have been terrific.

B&B Spoilers – How About That Monaco Shoot

B&B could not produce one of its famous location shoots in recent years because of the worldwide virus. With the logical easing of restrictions, people have been allowed to determine how they want to live their lives in this version of Los Angeles, California.

So, Steffy jetted with the children to Monaco. She needed to get away from the constant reminders of Finn that naturally existed at the cliff house and in every part of her life in LA.

It is affirming and part of a return-to-normal process for viewers to again see the characters they love outside California-based sets. Yes, this is the classic B&B fans of this show expect. That gift is appreciated in these times in which we are collectively living.

Te Bold And The Beautiful Spoilers – Peace Ahead And A Break

Steffy and Finn need to enjoy their lives for a while. So, no additional drama should be planned.

Fans do not want to see Sheila Carter (Kimberlin Brown) plot another attack against her daughter-in-law. They want to see Brown’s character jailed.

Sure, Steffy and Finn will confront daytime trouble again. But those dramas are best suited for the future after they renew their family bond.