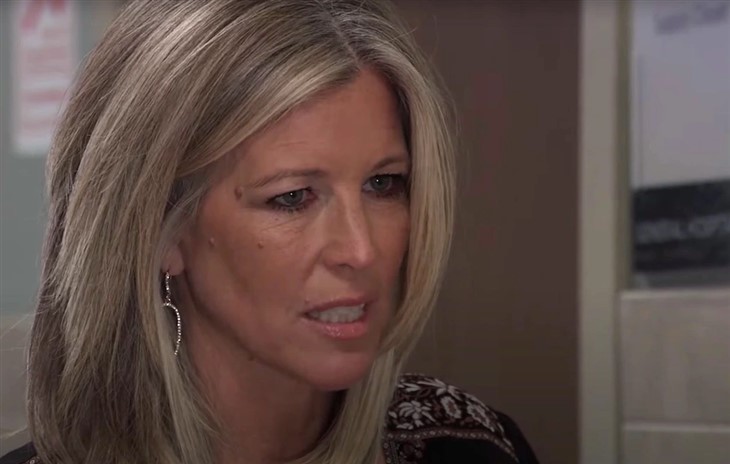 General Hospital (GH) spoilers tease that Willow Tait (Katelyn MacMullen) has a second fainting spell in just a matter of months. She is a young, seemingly healthy woman so these episodes may not bode well for her. Right now Carly Corinthos (Laura Wright) is sitting on the secret that Nina Reeves (Cynthia Watros) is her biological mother, is Willow’s health about to become a huge complication in this scenario?

Willow is clearly overwhelmed. She is training to be a nurse and she has a young child to care for, Wiley Quartermaine-Corinthos (Viron Weaver). On top of that her SO just got a major setback when his business merger fell through. She and Michael Corinthos (Chad Duell) also fought tooth and nail against Nina in a custody battle. Oh, and she has Snarly for what amounts to a MIL—wouldn’t you be stressed, too?

Fans have seen Willow grab her chest and gasp for air, and lately she has looked like a scary Halloween fright with dark circles all around her eyes.

In a preview clip, Willow is in the doctor’s office when Michael approaches her. At the same time his dad comforts his own SO, Nina.

Clearly, Willow is experiencing a medical situation. And this is where soap fans know what to expect next: a transfusion, organ transplant or bone marrow from a family member is needed. Which will bring into play her DNA.

Explosive show spoilers reveal that Carly will be faced with a dilemma. If it involves telling the truth about Nina and Willow, how far will she go to protect the secret and ultimately herself? Like Carly, Nina is a grandmother to Wiley. After the trial she was banished from his life, and the lives of his loved ones, including Carly. Is Carly willing to hurt Willow in the process of hurting Nina if it were to come to that?

By all indications, Willow is going to need some help down the line from a family member, which is where clueless Nina comes in. She is desperate to see Wiley, will Carly be low enough to play on this desperation? She could if she tells Nina the truth but convinces her to stay quiet in exchange for access to Wiley. And such a scenario would create a whole different hot mess!