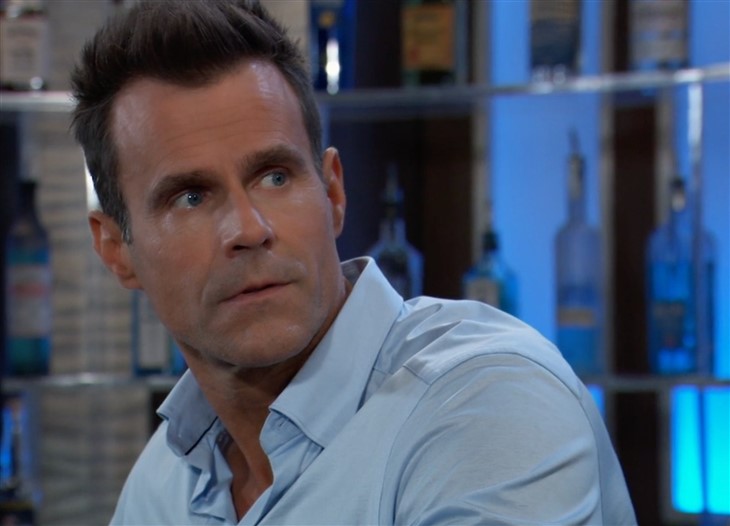 General Hospital Spoilers tease that Drew Cain (Cameron Mathison) may be home and free from Peter August’s (Wes Ramsey) conditioning, it doesn’t mean that he can’t be controlled again. Peter certainly knows how to activate Drew once again, and there is every reason to believe he won’t hesitate to do so, especially once he discovers the location of his baby. And it looks like that may happen very soon.

With so many people still looking into the disappearance of Maxie Jones’ (Kirsten Storms) baby, including Victor Cassadine (Charles Shaughnessy), it’s only a matter of time before Peter finds out that the baby is hidden in plain site and under the care of Brook Lynn Quartermain (Amanda Setton) and Harrison Chase (Josh Swickard). Peter knows Chase won’t let anything happen to that baby on his watch, so that’s when he will likely reactivate Drew.

Once reactivated, Drew won’t have any control of his actions. He will likely be told to take the baby no matter how far he has to go to make that happen. This could become a terribly violent situation as both Brook Lynn and Chase try to stop Drew. But as a former Navy Seal, Drew could easily hurt or even kill anyone that gets in his way and it could very well come to that. Look for Drew to escape with the baby, and for both Brook Lynn and Chase to be seriously injured.

General Hospital Spoilers – Harrison Chase And Brook Lynn Quartermaine Are Looking For A Place Of Their Own!

While this may all take place inside the Quartermaine mansion, with so many other people living there it seems unlikely. Since Brook Lynn and Chase are looking for a place of their own, it’s likely that its exactly where Peter will send Drew in the coming weeks. Hopefully Chase and Brook Lynn will survive, and that Drew will come to his senses sooner rather than later.

Can Drew still be controlled by Peter? Is Peter about to discover the location of his daughter? Will Brook Lynn and Chase survive if Peter sends Drew after the baby? Anything can happen in Port Charles so stay tuned to General Hospital airing weekdays on ABC. And don’t forget to check back right here regularly for all your General Hospital news, information and spoilers!