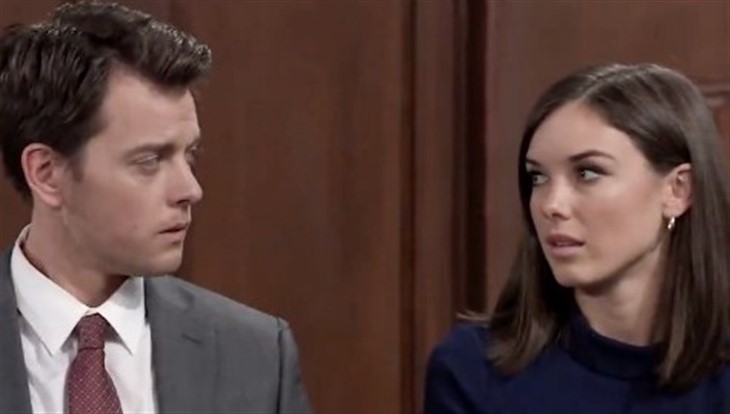 General Hospital spoilers reveal Michael continuing his ridiculous vendetta against Sonny while pretty much ignoring that Willow is not really doing very well.

General Hospital Spoilers – Willow Tait Has To Face Her Own Music

Even Willow Tait (Katelyn MacMullen) is in denial about how bad things are for her right now. She is pregnant and dealing with cancer and doesn’t want to burden precious Michael Corinthos (Chad Duell) with the news as he rails against his father for being mean to his mother, a routine that is growing old.

Michael even has evidence that Sonny Corinthos (Maurce Beanrd) ordered Dex Heller (Evan Hofer) to jury tamper but he won’t do anything about it because it will hurt Trina Robinson (Tabyana Ali) and Josslyn Jacks (Eden McCoy). And with all of Willow’s own problems, she might still know that something weird is going on with Michael.

Willow seems to notice little things about Michael that may be off, especially how patronizing he is to her and how he always thinks people are at fault when they aren’t. Case in point is when Michael didn’t realize Ava Jerome (Maura West) was actually comforting Willow the other day. But does Willow know just how far Michael is willing to go to hurt Sonny?

“I would think that Willow is at least a bit suspicious that something’s ging on. It’s all sort of under the cloak of, ‘Oh, it’s work stuff,'” Katelyn MacMullen said in the August 23, 2022, issue of Soap Opera Digest. “The way he talks about Sonny, the way he talks to Sonny, it’s kind of become this all-encompassing thing and Willow has broached the subject with him carefully.”

Will this all-encompassing side of Michael allow him to continuously act sexist around her and not notice what’s going on? And will Willow continue to know something is up but not even ask? “She feels the situation is a bit volatile and she has noticed a shift in Michael,” MacMullen said. “But I don’t think she has any idea of the specifics or who he’s working with or what exactly he’s doing.”

With Willow getting a diagnosis this week, can Michael’s vendetta now take a back seat or will Willow even tell him what’s going on? Stay tuned to General Hospital weekdays to see how this story plays out.