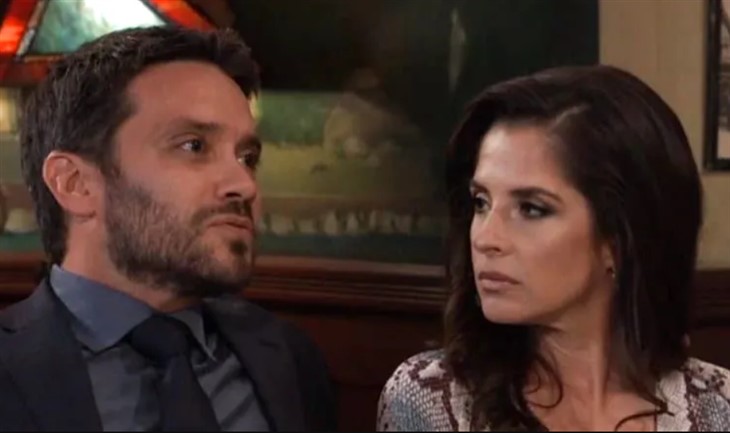 Dante Falconeri (Dominic Zamprogna) was only mildly unnerved when Cody Bell (Josh Kelly) crashed into the Metro Court pool. Seeing his childhood friend again after all this time felt like both a blessing and a curse. He was happy to see his face again, but it has felt too close for comfort the whole time having Cody in such close ranks with his friends and family when he has information on Dante that could blow his whole world apart.

If Sam McCall (Kelly Monaco) finds out what’s lurking in Dante’s past, he’s almost certain he will lose her. What’s a guy to do when he never thought his past would catch up with him? Does he have any chance at keeping Cody quiet?

When Dante hears from Sam that Cody was dropping hints about his past behavior to her, he’s practically going to jump out of his skin. Even though he was worried when Cody first came to town, he’s been in Port Charles long enough now without breathing a word of Dante’s past that he genuinely thought he could stop sweating it.

Dante is going to confront Cody and hope he puts it all to rest, but that’s not what will happen. General Hospital spoilers tease he may pretend all is well with his childhood chum, but as he becomes aware of just how nervous Dante is that Cody could start talking, he’s going to realize the invaluable power he has over him — and that might become useful to Cody very soon.

General Hospital spoilers say Dante has worked hard to get where he is in his life. He put in a few years of relentless work in New York City before taking up residence in Port Charles and calling it home. He’s been a tremendous asset to the PCPD, and he has good friends and family here who trust him more than most anyone they know. Until a few days ago, Sam was among them. Now, she’s worried Dante’s secret past could be something that comes back to bite him.

Truth be told, he’s worried about the same thing now that Cody is in Port Charles, too. Is the city big enough for the both of them? Cody might not have any intention of telling Sam — or anyone else — the truth, but the risk of it might be all it takes to drive Dante to take desperate measures to make sure his past stays hidden. In the meantime, his anxiety over the whole situation will see to it he starts slipping up, and Sam’s going to have a front row seat for that.

As Dante starts to behave less like himself, Sam isn’t going to have to think too hard about what’s going on with him. She will recognize that everything changed when she first told Dante that Cody referenced his past in a less-than-poor light. What has Dante so rattled that he can’t cover a grip? What might he have done in his last that has come back to haunt him? Rumor has it he’s been on the wrong side of the jail cell all the years. Keep checking back with us for more General Hospital news and spoilers to find out why!