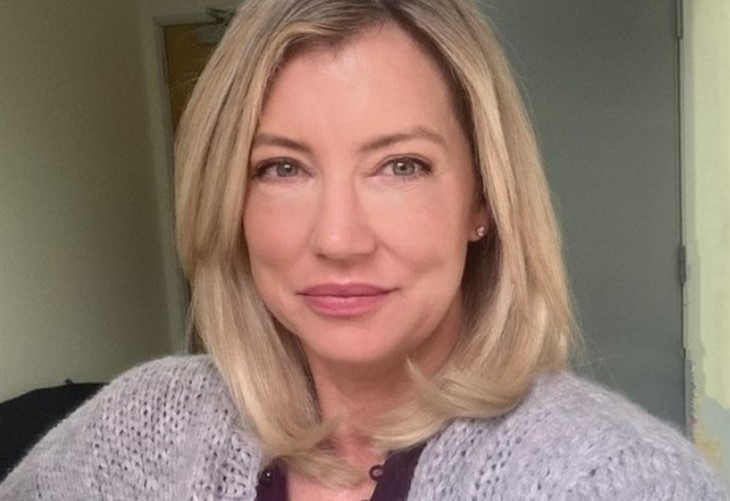 General Hospital spoilers reveal that the week of May 23 will focus on the legal battle over Wiley Quartermaine-Corinthos (Viron Weaver). Cynthia Watros, who plays Nina Reeves, opened up about the upcoming courtroom drama. The actress warned that there are some high-intensity scenes and things get quite nasty in the courtroom. Keep reading to find out more.

GH spoilers reveal that Nina wasn’t getting anywhere trying to convince Michael Corinthos (Chad Duell) and Willow Tait (Katelyn MacMullen) to allow her visitation with Wiley. Nina eventually decided to go the legal route. Speaking to Soap Opera Digest, Watros explained that Nina never wanted to go to court but felt she was forced to.

During the courtroom scenes, Carly Corinthos (Laura Wright) gets a message that the DNA results are in. Carly doesn’t want the test to show Nina is Willow’s biological mother. However, it seems that the test will confirm Harmony Miller’s (formerly played by Inga Cadranel) deathbed confession.

General Hospital spoilers reveal that Sonny Corinthos (Maurice Benard) is probably going to support Nina in court. Watros explained what is going through Nina’s mind when she gets Sonny’s support, which will only make things worse with Carly and Michael.

“I don’t think she wants to be the reason why the bridge that connects the son and father is burned. She’s like, ‘Sonny, you don’t have to do this. I want you to really think about going back home. You don’t have to be here.’ But he’s a grown man. It’s his decision. No way can Nina force Sonny to do anything, let alone testify on her behalf!”

Watros also teased that the courtroom battle will get quite intense. The actress also said that things get nasty and there are some unexpected turns.

“All she wants is to have a relationship with her grandson, and none of what she’s done in her life makes her less of an amazing grandmother… She didn’t want to go to court! She didn’t want to drag everybody into this courtroom and unpack everyone’s dirty laundry. But she felt like this was the only thing that she could do.”

“I hate having to be nasty [in scenes] to Katey, this person that I love – but I also love it, because it’s drama that I would totally want to watch in the afternoon!”

What do you think is going to happen with the court hearing? Will Nina end up losing the case? What happens after the verdict with Nina, Carly, Willow, Michael, and Sonny?

Counting On: See the Inside Of Jill Dillard’s New Home