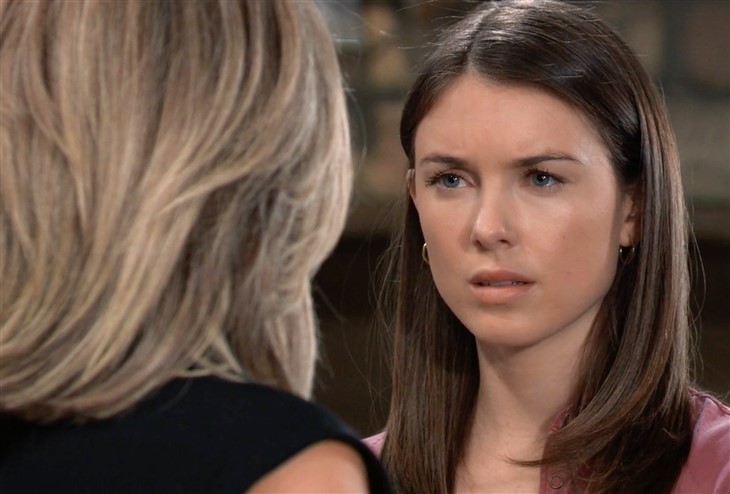 General Hospital spoilers reveal that Willow Tait (Katelyn MacMullen) is reeling over the double-whammy of Harmony Miller’s (Inga Cadranel) deception. The actress teased that Willow is fed up with people not telling her the truth about things. When Willow finds out that Carly Corinthos (Laura Wright) withheld the identity of her mother, the young woman could explode.

GH spoilers reveal that Harmony was desperate to keep her crimes a secret. In addition to the deaths of Neil Byrne (Joe Flanigan) and Brendon Byrne (Josh Coxx), Harmony kidnapped Willow as a baby. This wasn’t the biggest bombshell, though.

Harmony begged Carly to protect Willow no matter what it took. Then, Carly asked about the identity of Willow’s biological mother. That is when Harmony admitted that Willow is a twin but not just any twin. Willow is the twin of Nelle Benson (Chloe Lanier). That is when Carly was horrified to discover that Willow’s real mom is none other than Nina Reeves (Cynthia Watros).

So far, Carly has only admitted to a partial truth. Carly told Willow that Harmony wasn’t her real mom. Carly also said that Willow was kidnapped as a baby. However, Carly hasn’t revealed that she knows who Willow’s mother is, or that the woman lives in Port Charles.

Carly is torn over what to do about the situation. However, it sounds like Carly is going to try and keep Willow from finding out that Nina is her mother.

General Hospital spoilers reveal that actress Katelyn MacMullen spoke to Soap Opera Digest about the storyline. The actress explained that Alexis Davis (Nancy Lee Grahn) admits to knowing that Harmony wasn’t Willow’s real mother. This infuriates Willow as she is fed up with everything “protecting” her by withholding information.

“Whether or not all these people around her are being honest about what they know and what they don’t know, Willow is sick of feeling like she’s at the mercy of other people telling her the truth or not. So, she’s like, ‘You know what? It’s time. I need to get this DNA test and I need to figure out the truth for myself. Alexis knew for who knows how long and didn’t tell me, so I can’t necessarily rely on other people to tell me!’

MacMullen added that Willow is tired of having to second-guess everyone. Willow has suffered a major betrayal and can’t rely on people being honest with her. So, Willow is going to do what’s necessary to find out the truth for herself.

When Willow learns that the people closest to her knew about Nina and kept it from her, there could be a price. Willow won’t just explode, she could actually turn on the Corinthos family. So, we will have to find out what Willow does when she learns about Carly’s deception. Is it possible that Willow could suddenly become Team Nina?