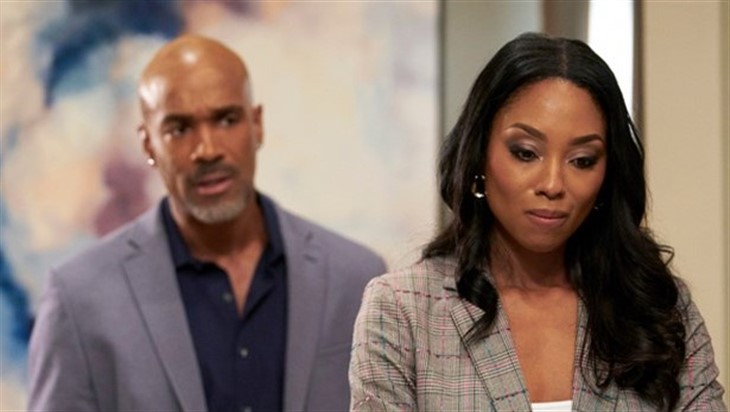 General Hospital (GH) spoilers reveals Curtis Ashford (Donnell Turner) isn’t an easily angered man. It takes a lot to ruffle his feathers. But after all he and Jordan Ashford (Tanisha Harper) have been through – much of which she put him through all on her own – he was furious to find she could have been so careless as to not have filed their divorce papers. Her mishap delayed his ability to plan his wedding with Portia Robinson (Brook Kerr), and more than that, it seemed like there was more to the story.

It was hard for Curtis to accept Portia’s implications that Jordan wanted another shot with him. If that’s true, she’s certainly never hinted at it; Jordan has been respectful of Curtis’ relationship with Portia. However, despite Jordan clearing things up and getting the divorce finalized, it never sat well with him that she overlooked something that significant. He didn’t have another explanation for it though — until now. Will he deliver the apology Jordan deserves?

Portia and Jordan haven’t been getting along, but Curtis hasn’t really taken note yet of just how contentious things have gotten between the two of them. When they have words again and things get heated, Portia may hurl an insult Jordan’s way implying she’s pining for Curtis. As Jordan aims to take it like a grown woman and refuses to address Portia’s low blows,

Stella Henry (Vernee Watson) will jump in and break it up. Stella appreciates that Jordan covered for her, but she won’t allow it to go on anymore. When Stella confesses she was the one who botched the divorce by stealing the divorce papers in hopes that Curtis would work things out with Jordan, he won’t be the only one trying to pick his jaw up off the floor.

While Curtis is surprised by his Aunt Stella’s admission of guilt, he’s also relieved. He’s had so many questions about the divorce papers kerfuffle hanging over his head for months, and Stella just made sense of them in one sentence. He can absolutely see her stealing those divorce papers right off of Jordan’s desk and thinking it’s in everyone’s best interest. He has struggled this whole time to see Jordan simply glossing over them like they weren’t important and forgetting to tie up the loose ends.

Curtis might not even be all that mad at Stella, but he will know he was wrong to be mad at Jordan at all, and he’ll feel bad about that. Portia, on the other hand, is going to feel like both Stella and Jordan deceived them once again by withholding the truth, and she doesn’t like that Jordan comes off looking like a martyr who was only trying to protect Curtis’ auntie.

Curtis will apologize profusely to Jordan, and he’s going to move forward trying to figure out a way to make this up to her, because he was very cruel to her when he first found out they were still married. Curtis is happy every time Jordan reminds him she’s not all bad, and Portia is tired of him receiving those reminders. Will they make it to their Valentine’s wedding day without any more hiccups involving his ex-wife? Stay tuned for more General Hospital  news and spoilers to find out!