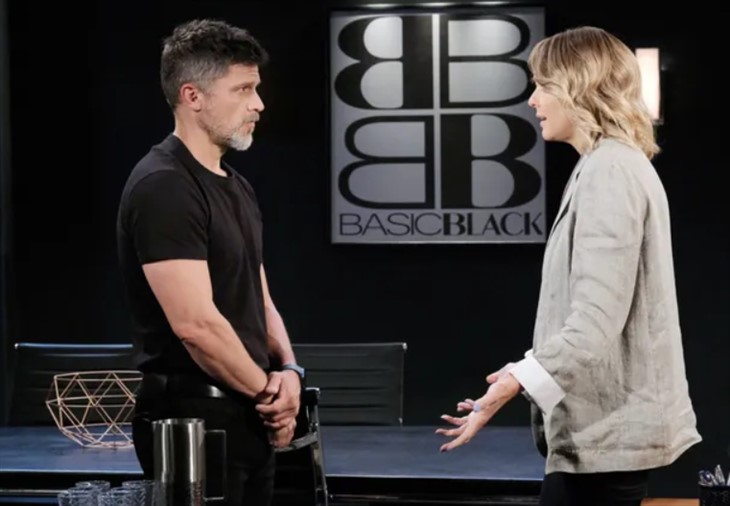 Days of Our Lives spoilers and updates tease that Nicole Walker-Hernandez (Arianne Zucker) will worry to friend Chloe Lane (Nadia Bjorlin). Nicole gave Jada Hunter (Elia Cantu) some unsolicited advice about single motherhood and career, and worries what Jada will choose to do.

Jada was resentful of Nicole presuming to tell her what she should do at all, considering she broke up her relationship with Eric Brady (Greg Vaughan). Jada feels for her boss, Police Commissioner Rafe Hernandez (Galen Gering) as well, he didn’t deserve what Nicole did to him. Nicole took it upon herself to tell Jada to think twice before going through with her pregnancy with Eric’s baby, warning the life of a single mother isn’t easy.

In reality, Nicole doesn’t even know how working during pregnancy is because she never carried a baby. Yet, she acted like she knew all about how difficult pregnancy while working is, especially for a cop.

Behind all of Nicole’s concerns about how Jada will handle her pregnancy is fear that Eric will abandon her for Jada because she can’t give him a baby. Chloe was Nicole’s surrogate, who carried Holly Jonas (Elin Alexander) Nicole’s daughter with Daniel Jonas (Shawn Christian) and Chloe co-parented Holly with Eric for a short time. Chloe is sympathetic to Nicole, having just come through trying to co-parent Rachel Black (Finlay Rose Slater) with Brady Black (Eric Martsolf) who went back with her birth mother. Jada may be a far cry from Kristen DiMera (Stacy Haiduk) but the situation is similar-she agrees Eric trying to co-parent a baby with Jada spells trouble. Nicole refuses to raise Eric’s baby with another woman, as if Jada would even allow Nicole near the child to begin with-it’s obvious Jada hates Nicole.

Days Of Our Lives Spoilers – She Tried To Influence Her

While Nicole didn’t come right out and say Jada should terminate her pregnancy, she certainly tried to spin her spiel to influence her to do so. She made her advice slanted, with an emphasis on all the negative things that could happen, including the threat of Jada being tied to her for life as well as Eric. She picked up on Jada’s antagonism towards her and used it to full advantage.

Chloe poses one question to Nicole, however; if Jada terminates her pregnancy and blames it on her, can Nicole handle the expected backlash from Eric? Nicole says there is no backlash to worry about since Eric told her he told Jada it was her body, her choice; but Chloe’s not so sure.