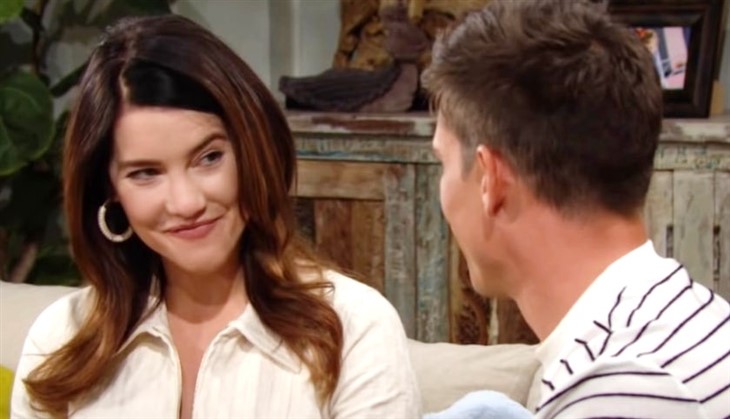 The Bold And The Beautiful (B&B) spoilers reveal that recently supervising producer Casey Kasprzyk offered a holiday preview of sorts on Bold Live! On YouTube. Kasprzyk answered fans’ questions about the lack of scenes between Steffy Forrester (Jacqueline MacInnes Wood) and John “Finn” Finnegan (Tanner Novlan) since his miraculous return.

The Bold And The Beautiful Spoilers – Where Is The Romance?

The Bold and The Beautiful spoilers reveal that instead of having a romance between Steffy and Finn they have been playing matchmakers instead. Even involving Finn in this plot to push Ridge Forrester (Thorsten Kaye) and Taylor Hayes (Krista Allen) together. Hopefully, now that Steffy has seen how far Thomas Forrester (Matthew Atkinson) has taken this plan, she will back off.

Kasprzyk indicates that as the year comes to a close fans will see more of the Finnegans. It seems that around Christmas and later the Finnegans may be in the spotlight and fans are thrilled. However, fans also wonder if Sheila Carter (Kimberlin Brown) is going to be involved. After all, Sheila faked her death to get close to her son, will she try to become a part of Finn and Steffy’s lives?

Things could go a few ways for Sheila. After all, Sheila has forced Deacon Sharpe (Sean Kanan) to allow her to stay in his apartment. All the while, Sheila has been plotting to get back into Finn’s life while having a sexual relationship with Deacon. Sheila is also putting Deacon in a spot where he could go back to prison because of her and she doesn’t care.

Will Sheila cause Deacon and herself to land back in prison? After all, Sheila is a fugitive. Sheila is wanted for two shootings. Sheila tried to kill not only her son but her daughter-in-law as well. Sheila also faked her death. Will Sheila be caught around Christmas? Sheila has been eager to get in touch with Finn for months. Does Sheila think Christmas will make Finn accept her easier?

The Bold And The Beautiful Spoilers – Will Sheila Carter Attack Someone Again?

Sheila also almost killed Li Finnegan (Naomi Matsuda) as well. Will Li see Sheila and call the cops before she can hurt anyone else? Could Sheila attack Li and Finn have to protect his mom? Steffy would certainly call the law if she thought she saw Sheila. Could Sheila try to kill Steffy again to get to Finn and his son?

Sheila is a very dangerous woman and Steffy knows that. Will Sheila come after Finn and Steffy to try and gain acceptance?