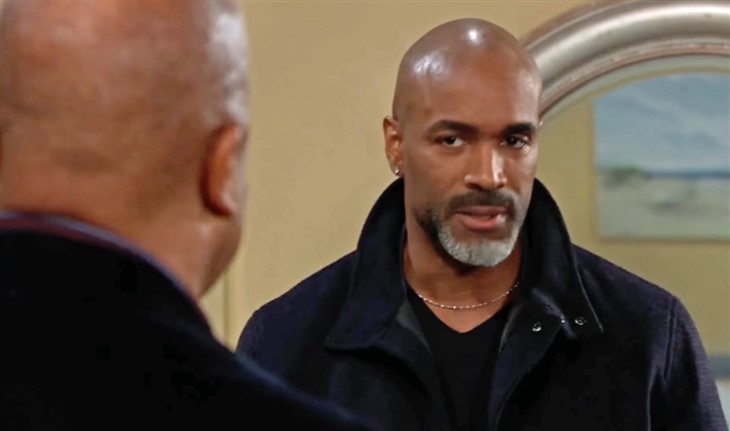 General Hospital (GH) spoilers reveals Curtis Ashford (Donnell Turner) hasn’t slept well since receiving the results of his genetic screening test. He went in wondering if he had any markers for Schizophrenia — since his father, Marshall Ashford (Robert Gossett) developed it many years ago. It was important to Curtis that he know what to expect, and also know what he might be able to pass on to children, now that he’s planning to marry Portia Robinson (Brook Kerr).

The results were a huge success, and Portia was stunned at how remarkable they were. Out of ten possible genetic markers Marshall could have passed on to Curtis, he had none of them. Portia couldn’t contain her shock, and Marshall seemed to have a hard time containing his emotion too as he teared up and left soon after. Ever since that exchange, Curtis can’t shake the feeling that there might be more to the story.

In his defense, he does have Schizophrenia, but it’s been managed well for decades. Still, Marshall was pretty calm as they awaited the results. When they rolled in and Curtis was found to be completely in the clear, it almost seemed like Marshall was disappointed. While he told Curtis that he was scared for him and just felt overwhelmed with relief that brought tears to his eyes, something didn’t feel right about it for Curtis. Is his dad holding back on him?

GH Spoilers – Hint Portia Robinson Has Her Own Opinion

When Curtis goes to his fiancé and asks her what she was thinking when she read those results, she’s going to be startled. The last thing Portia wants to do is get into a discussion with Curtis about what if’s now that this whole fiasco is behind them. When he starts talking about Marshall possibly not even being his father, Portia is going to feel the weight of her own secret on her shoulders, as she still hasn’t told Curtis he is very likely Trina Robinson’s (Tabyana Ali) father. Curtis is going to struggle with Portia’s response as she seems like she wants to persuade him to drop the whole thing and accept the blessing that is his clean bill of health.

Eventually, Curtis is going to feel bothered enough to confront his father about his curiosity. If there’s nothing to hide, he figures they can all laugh about this someday. But right now, Curtis is feeling very unsure about the odds of him not inheriting a single genetic marker from his dad. He just doesn’t feel that lucky. He needs to hear it from Marshall’s mouth that he is his father. Will he? Stay tuned for more General Hospital news, updates, and spoilers as we keep dishing them out all day long.