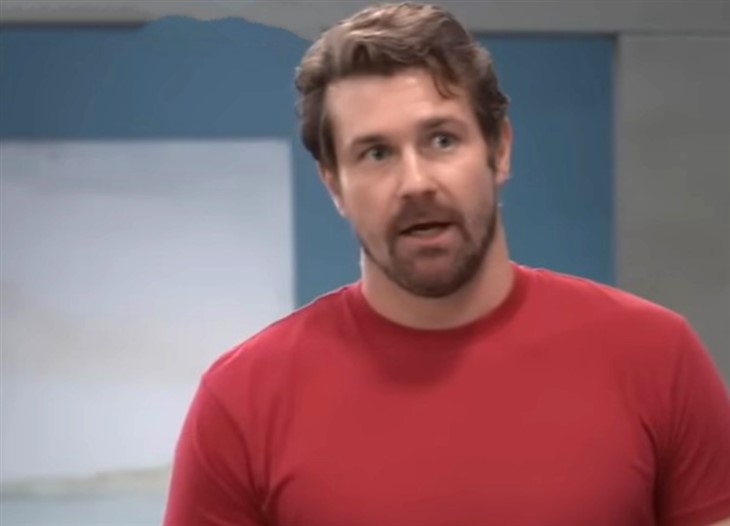 General Hospital (GH) spoilers tease that Cody Bell (Brock Kelly) knows how to take advantage of any and all opportunities that present themselves even if it means doing things that are a bit shady or even dangerous; He’s only been in Port Charles a few weeks and he already jumped out of an airplane for a publicity stunt for a dating app, found a way to blackmail Damian Spinelli (Bradford Anderson), made an enemy out of mobster Selina Wu (Lydia Look), and was beaten by her men for winning a little too big at her high stakes poker game, all the while attracting the ire of Dr. Britt Westbourne (Kelly Thiebaud).

While Cody originally planned to have already left town, he has recently decided to stay most likely because of the obvious sexual tension he shares with Britt. Cody’s childhood friend Dante Falconeri (Dominic Zomprogna) has warned Cody that although she seems to have changed for the better, Britt was once an awful person. Cody agreed that Britt wasn’t worth his time but his interest seemed to have returned once he discovered that Britt is Cesar Faison’s (Anders Hove) daughter.

Sam McCall (Kelly Monaco) told Cody that given his love and knowledge of horses, she would put in a good word for him with the Quartermaine Family who need someone to run their stables. Olivia Falconeri (Lisa LoCicero) will likely be spending a lot of time at the stables with her son Leo Falconeri (Easton Rocket Sweda). And although Olivia’s marriage to Ned Quartermaine (Wally Kurth) seemed to finally be back to a good place, Ned’s decision to back Valentin Cassadine (James Patrick Stuart) over his own family members may once again question their relationship.

Cody will likely offer an ear as an increasingly frustrated Olivia finds herself needing to vent. Or perhaps she will just appreciate Cody’s body and down-to-earth nature. And even though she will try to resist, at some point they will find themselves hooking up in the stables. Cody is likely just working a con on Olivia, Olivia won’t care because she will admit she is using Cody as much as he’s using her. But Cody will quickly give up any blackmail plans once he sees that Olivia is not someone to have as an enemy.

Will Cody try to sleep with Olivia? Will Ned’s questionable business practices cause Olivia to once again question their marriage? How long will it take for Cody and Olivia to have sex in the stables? Anything can happen in Port Charles so stay tuned to General Hospital airing weekdays on ABC. And don’t forget to check back right here regularly for all your General Hospital news, information, and spoilers!