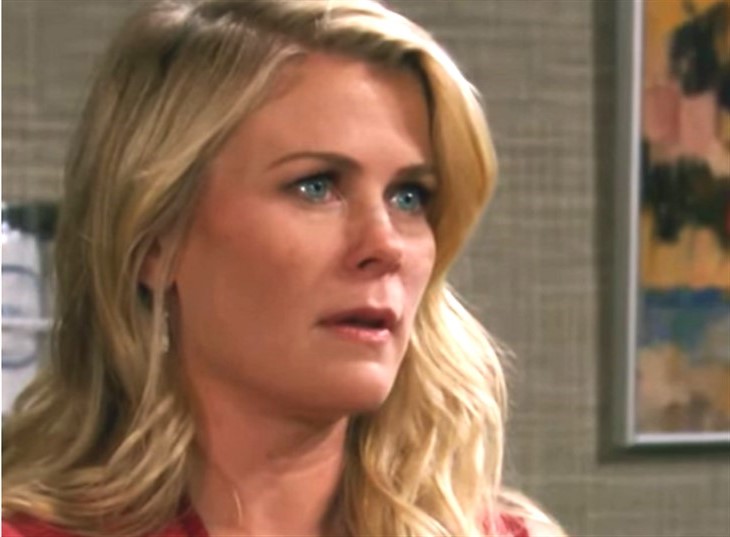 Days of Our Lives spoilers and updates tease there will be spy games, accusations and heart to heart talks in the next two weeks on DOOL!

Sami has investigative skills in her blood being the daughter of Roman Brady, (Josh Taylor) former ISA spy and Salem Police Commissioner, but Roman would prefer she spied elsewhere! Both he and her stepfather John Black (Drake Hogestyn) would prefer she used her spying skills for better reasons than to spy on her exes! Sami already knows that EJ DiMera (Dan Feurreriegel) has made a sister to sister move to Belle Brady (Martha Madison) but she handed over the divorce papers, and he signed them.

No harm, no foul because Sami freed EJ to sleep with whomever he wants and she’s ready to marry Lucas Horton (Bryan Datillo)!  They’ll be planning their wedding even though EJ thinks Lucas kidnapped Sami and framed him – and he’d be right!

The only problem with Sami’s spying is ultimately, it might lead to crying – she has her heart set on marrying her first ever love Lucas but her wedding might go bust! She’ll overhear her rival Nicole Walker – make that recently married Nicole Walker Hernandez (Arianne Zucker) who just married another ex, Rafe Hernandez (Galen Gering) talking to EJ! It sounds like EJ might be plotting against Sami’s wedding to Lucas; during the week of July 11, Sami’s world is turned upside down when their wedding takes an unexpected turn. It’s entirely possible that Sami overhears Nicole encouraging EJ to expose what he knows about Lucas’ kidnapping, which is the same thing that got Abigail DiMera (Marci Miller) killed. Or at least, that’s the theory-but Lucas will have a plan which his mother Kate Roberts (Lauren Koslow) won’t like!

Chad DiMera (Billy Flynn) is having major emotional issues getting through Abigail’s funeral although friends and family come to support him. Sonny Kiriakis (Zach Tinker) and Will Horton (Chandler Massey) will give hugs and support, as well as Tony and Anna DiMera (Thaao Penghlis, Leann Hunley). Meanwhile, Rafe will bring in a suspect thanks to Clyde Weston (James Read) getting that hot bag of Abigail’s jewelry from Leo Stark (Greg Rikaart).

Rafe recognizes a bracelet Nancy Miller (Patrika Darbo) is wearing as one missing from the crime scene!, He brings Clyde in after she tells him it was a gift from him and Chad goes beserk at the police station and tries to lunge at the prisoner!

Chad’s grief will turn to rage and rage to revenge, and finally to vigilante justice as he looks for Abigail’s killer, when he doesn’t think the Salem police are doing enough! Rafe is down two detectives since Eli and Lani Grant (Lamon Archey, Sal Stowers) left; and Shawn Brady (Brandon Beemer) has his hands full with Jan Spears (Heather Lindell)! Gwen Rizchech, (Emily O’Brien) Leo, and even Sarah Horton (Linsey Godfrey) will likely be suspects – Leo especially if Chad’s son Thomas DiMera (Cary Christopher) finally talks about the tooth fairy! Gwen was in and out of Statesville that night although she made a call to an unknown person and Sarah went after Chanel Dupree (Raven Bowens) with a knife! During the week of July 11, Chad will have an epiphany about the possible murderer!

Days Of Our Lives Spoilers – Heart To Heart Talks

Finally, back to Lucas, he will have some heart to heart talks with his father, Roman and his son, Will. Lucas was really worried after his drunken fall off the wagon that he was the one who killed his niece until he remembered how he got that cut on his hand! He’ll also have a heart to heart talk with his mother Kate, but she won’t like what he’s saying.

Kate already knows that Lucas kidnapped Sami to make himself her hero, and framed EJ for it. Lucas may feel that he needs to unburden himself about it to Roman and Will, especially if Chad’s epiphany about Abigail’s murderer is about him!