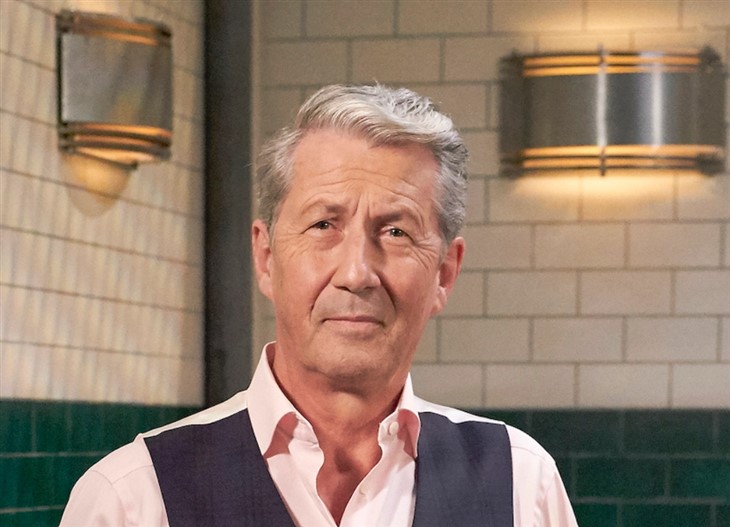 Basically, what Victor is trying to do with Valentin is use him for his soldier – the thing he couldn’t do with Drew Cain (Cameron Mathison)! Obviously, Victor has given up on trying to program anyone since the secrets of the cards died with Peter August (Wes Ramsey) and Jason Morgan (Steve Burton). But he has been somewhat successful in forcing Valentin to do certain things – but there are a couple that Valentin won’t do and hasn’t done.

Valentin’s framing Jennifer Smith (Holly Gagnier) for stealing the Ice Princess may be one of them that he did but the Ice Princess went to the WSB instead of Victor. Victor clearly set up the murder of Luke Spencer (Anthony Geary) to retrieve the Ice Princess but Valentin knew what it could do and couldn’t let it get to Victor!

Victor overhears Anna on the phone being too nosy and asking too many questions – she is suspicious of the months that Valentin spent recuperating in a clinic. He wants to know why Anna is investigating his son when he thought they were involved romantically; he plays the part of a concerned father but is digging for intel! He respects Anna as an excellent investigator, and he would know her WSB record having headed the spy organization himself around twelve or so years ago. That was roughly the same time that Anna took on the job of Port Charles Police Chief and had a brief romantic relationship with Luke. Victor and Anna play a sort of game of cat and mouse as they interrogate each other, both having a lot of spy experience!

One would think that a father would ask a girlfriend about her intentions towards her son, since turnabout is fair play and the question is asked about boyfriends regarding girlfriends! However, it is Anna who asks Victor some pointed questions about his intentions regarding Valentin, but Victor dances around them! Neither Victor or Anna really gives up any real information to each other as all as they play the interrogation game with each other!

Both Victor and Anna have their own theories about each other, and they both operate like chess players strategizing which move to make next! She can’t completely figure out the puzzle of what Victor is doing with Valentin and he can’t understand why she’s investigating him!

One thing that Victor has tasked Valentin with is to neutralize Laura Collins (Genie Francis) who he deems a true threat to his continued freedom! When he left Cassadine Island in handcuffs he was able to work a deal for his freedom in exchange for certain information and she could reverse it! Victor is disappointed and angry when Valentin tells him he “failed” to remove Laura as an obstacle. But Victor learns something about his son; namely, Valentin has a moral compass he never knew existed! Victor realizes there are certain boundaries to what he can ask Valentin to do or not do!