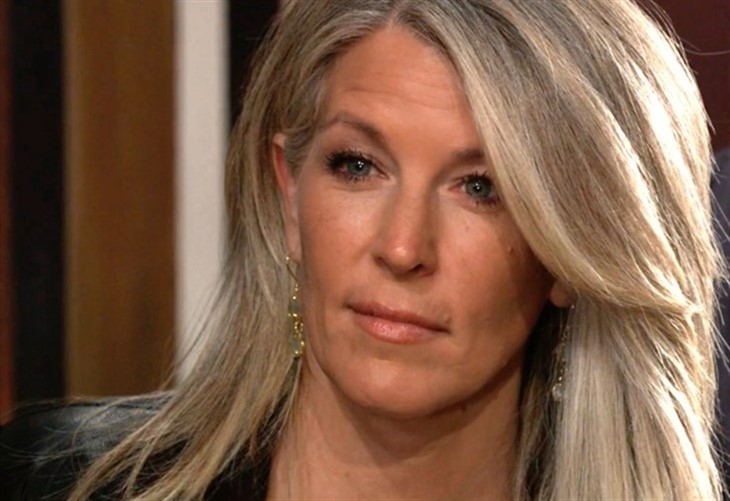 General Hospital (GH) spoilers reveal that Josslyn Jacks (Eden McCoy) and Cameron Webber’s (William Lipton) night together at the cabin has gone viral. Not only did Esme Prince (Avery Kristen Pohl) air the video for everyone to see in class, but sent it to the students as well. As it sweeps across campus and Port Charles, Carly Corinthos (Laura Wright) takes action.

GH spoilers reveal that Esme has taken action with the secret recording she took of Cameron and Josslyn’s night of passion at the cabin. After holding onto it for a few weeks, Esme decided the best place to release it was in the middle of class.

Cameron and Josslyn were stunned to see their special night together playing out on the screen in front of the entire class. At the same time, everyone’s cell phones went off, so it’s clear that Esme also texted it to each and every student at Port Charles University.

It is teased that Josslyn will unleash her rage at Cameron. Understandably, Cameron is insulted and shocked by the accusation. Cameron lets Josslyn know that he would never record their special night together, especially without her knowing about it. After a few minutes, Josslyn realizes that Cameron is right.

Then, the couple realizes who is really responsible, which is Esme. The villain is already prepared though and puts it all on Trina Robinson (Sydney Makayla).

General Hospital spoilers reveal that during the week of March 7, Josslyn will turn to Carly for comfort. Carly is already going through quite a bit, but will want to do everything in her power to help Josslyn.

Carly’s mama bear claws are going to come out and despite Esme thinking she’s invincible, can she really tangle with Carly and survive? Or is the other way around with Carly not realizing just how manipulative and resourceful Esme can be?

It is teased that during the week of March 14, Carly will have a fierce confrontation. During this battle, Carly will make herself very clear to Esme about what she’s capable of. Esme will probably play the innocent victim, but Carly isn’t going to buy it. In fact, nobody buys that act!

However, how will this story end? Will Esme be taken care of or could she turn to her new pal Victor Cassadine (Charles Shaughnessy) for help?

What do you think is going to happen when Josslyn fills in Carly about the video? Will Carly take care of the young villain or is everyone still underestimating Esme?