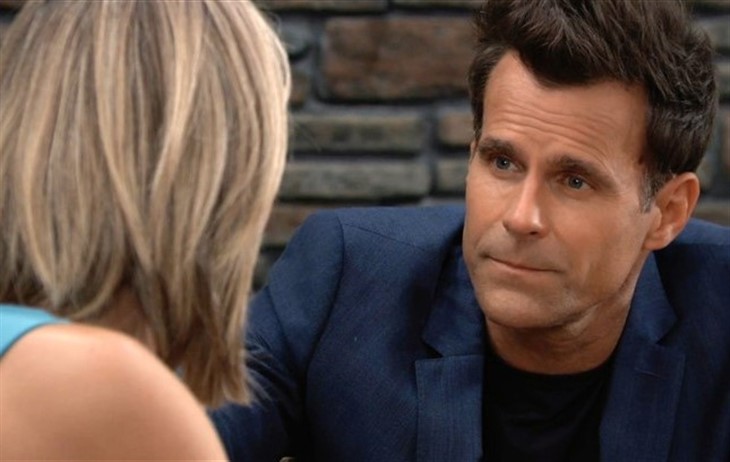 General Hospital spoilers tease that Carly Corinthos (Laura Wright) is keeping a huge secret about Willow Tait (Katelyn MacMullen). Carly and Drew Cain (Cameron Mathison) were shocked by Harmony Miller’s (Inga Cadranel) deathbed confession. Harmony revealed that Willow’s real mother is Nina Reeves (Cynthia Watros) a woman that both Carly and Willow currently despise. Drew and Carly retrieved DNA from both Willow and Nina to verify the truth. But when the DNA tests came back, Carly lied to Drew that Nina and Willow were not a match.

Recently, Willow discovered that she and Michael Corinthos (Chad Duell) are expecting a baby. There had been quite a bit of concern about Willow’s health until that point because she had passed out twice before. Willow and Michael were thrilled to find out they are about to become parents once again and shared their news with an equally excited Carly. Carly was sure she made the right decision to keep the truth from Willow as they prepare for the blessed event! Unfortunately, there may be more to Willow’s health issues than just a pregnancy!

GH Spoilers – TJ Ashford Suspects There Is More Going On!

New doctor TJ Ashford (Tajh Bellow) is concerned that Willow’s fainting spells may have been caused by something other than her pregnancy. Her white blood cell count is low and although that is normal during pregnancy, it seems to have been low even before Willow conceived. Willow could have a serious medical issue that requires bone marrow or even a transplant from a living blood relative. For now, Willow has kept her condition a secret from everyone until she knows more about what she is dealing with.

Since no one knows that Nina is Willow’s biological mother, there is no reason for Nina to believe she could save Willow’s life. But if something happens to Willow because Carly kept the truth from everyone involved, she is likely to not only lose her close friendship with Drew but the love of her son, Michael. Carly will feel terrible if something happens to Willow because she didn’t come forward. But right now, Carly’s hatred of Nina is too strong for her to do anything else.

Will Willow be able to have the baby? Does Willow have another medical issue that could cost her life? Will Carly come forward in time to save Willow? Anything can happen in Port Charles so stay tuned to General Hospital airing weekdays on ABC. And don’t forget to check back right here regularly for all your General Hospital news, information, and spoilers!