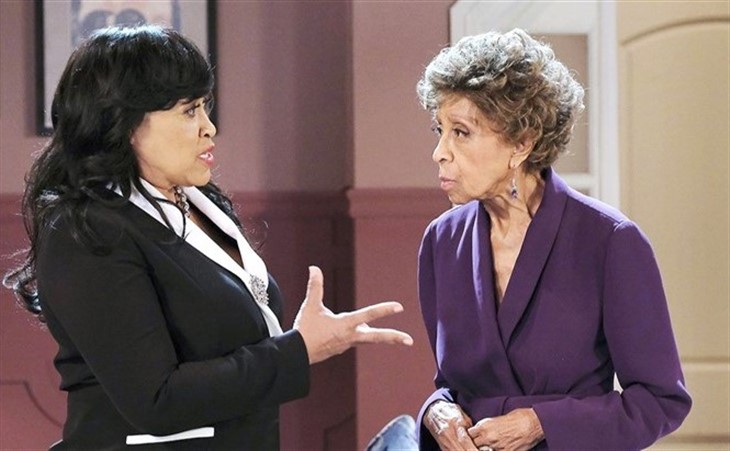 Days of Our Lives reveal that Sal Stowers (Lani Grant) and Lamon Archey (Eli Grant) may be gone, but not before they express their gratitude in an interview with Soap Opera Digest. Before their exit, Sal and Lamon were lucky enough to work with two comedy legends. Lani’s mother and grandmother, Paulina Price (Jackee Harry) and Olivia Price (Marla Gibbs) are comedy royalty.

Days Of Our Lives Spoilers – A Pleasure To Work With

Days Of Our Lives Spoilers indicate that Lamon and Sal could not be happier about their last few months on DOOL. Marla came on months ago to reveal the truth about Lani’s parentage. However, Marla didn’t just make one appearance and that thrilled both Sal and Lamon. After all, both actors were legends long before Lamon and Sal joined soaps.

Marla has been a legend for years. Marla worked with greats like Sherman Hemsley (George Jefferson) and Isabel Sanford (Louise Jefferson) from “All in the Family” and “The Jeffersons”. Marla and Jackee later worked together on “227”. The two reunited on Days of Our Lives as mother and daughter.

DOOL Spoilers – Proud Of Their Work

Archey says it was such a pleasure to work with both Jackee and Marla. Archey vows to hold onto the memories and the talks they had. Lamon has photos to remember their time by as well. Lamon is proud of the work that Marla and Jackee have done for the culture.

Lamon admits that having Marla and Jackee come to the show and bring their star power was great. How often do you get to work with people that you watched growing up? Lamon says that Jackee and Marla are just as good of humans as they are actors.

Days Of Our Lives Spoilers – Here To Elevate “Elani”

Stowers chimed in saying she felt special and honored that Marla and Jackee were brought onto the show. Sal says she was proud that these two greats were there to elevate her story, Lani and “Elani”. Sal admits that she couldn’t have been more thankful for Marla and Jackee.

Now that Sal and Lamon have exited from Days of Our Lives, Paulina is concentrating on helping Chanel Dupre (Raven Bowens) choose between the two potential loves of her life. Paulina is also working to further Abe Carver’s (James Reynolds) career as well.

Will Olivia return in the future? Could things work out for Lani and Eli to return with the twins one day? Perhaps the family will reunite in the future, only time will tell. However, fans certainly enjoyed having the two legends together and would love to see Jackee and Marla together again.