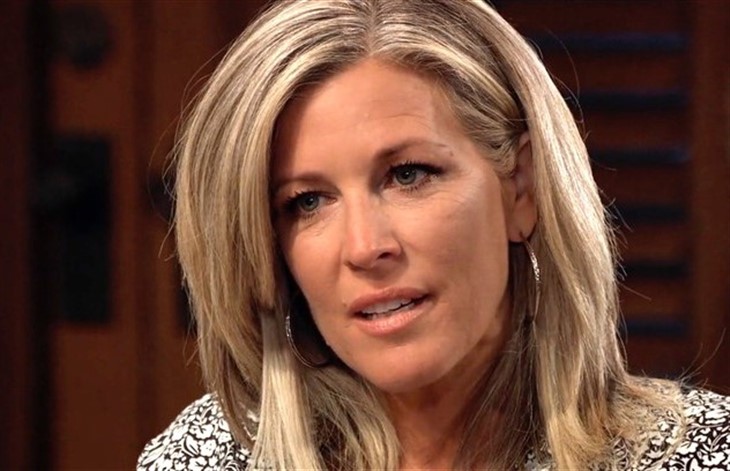 General Hospital Spoilers tease that Sonny Corinthos (Maurice Bernard) will soon be headed toward divorce court once again. Carly doesn’t believe that her marriage can be saved after she walked in as Sonny was making love to Nina Reeves (Cynthia Watros) on the Haunted Star.

Sonny had amnesia for many months and didn’t even know he had a family because even though Nina found Sonny there, she never informed Sonny’s family. Being together for months in Nixon Falls led to romance. However, General Hospital spoilers show Nina and Sonny did make love while in Nixon Falls because Nina said she wouldn’t sleep with Sonny until his memories returned.

Sonny eventually regained his memories and raced back to his wife and family as quickly as he could. But whether or not he wanted to admit it, Sonny’s time in Nixon Falls changed him. Sonny still loved Carly without question, but he was also drawn to Nina. Those feelings they felt in Nixon Falls still linger and because Sonny kept everything about his feelings a secret from Carly she began to suspect that there was more to the story. Carly was understandably furious, so she asked Sonny to give her the space and time she needed to process everything.

GH Spoilers – When Sonny Corinthos Mistakenly Believed That Carly Corinthos Was Leaving For Good, He Slept With Nina Reeves

When Carly didn’t show up to the extravagant date night Sonny had set up at the Haunted Star, he didn’t waste any time and he immediately slept with Nina. And since Carly saw their lovemaking with her own eyes, she’s going to take the one thing away from Sonny that no one else has been able to do for any real length of time. No matter what else was going on, all mob business was unquestionably Sonny’s.

But during the many months Sonny was gone on General Hospital, Carly had to step up in Sonny’s place, most notably when she attended a meeting of the five families. Most of the other mob bosses in the area have either died or gone to prison, with the exception being Selina Wu (Lydia Look).

If Carly really wants to hurt Sonny, she will find a way to steal his business out from under his nose. Selina and Carly seemed to admire each other when Carly was welcomed into the Five Families. Also given the fact that Selina didn’t fulfill her last agreement with Sonny, it may be in Selina’s best interest to back Carly. Viewers may remember that Sonny used his influence to make sure Selina’s nephew, Brad Cooper (Perry Shen) was given early probation from prison. Selina was to eliminate Peter August (Wes Ramsey) permanently and while she did manage to poison Peter, he is still alive. Sonny hasn’t retaliated. It may be in her best interest to make sure Sonny is in no position to retaliate. With Selina’s help, Carly could certainly stage a takeover. This would hutt Sonny more than anything else Carly could do to him.

Would Carly actually take over the mob to get revenge on Sonny? Would Selina become Carly’s ally and protector? Why hasn’t Sonny confronted Selina about her botched hit on Peter? Anything can happen in Port Charles so stay tuned to General Hospital airing weekdays on ABC. And don’t forget to check back right here regularly for all your General Hospital news, information and spoilers!

B&B Spoilers: Is Brooke Getting A Get Out Of Jail Free Card?