B&B Spoilers: Is Brooke Getting A Get Out Of Jail Free Card? 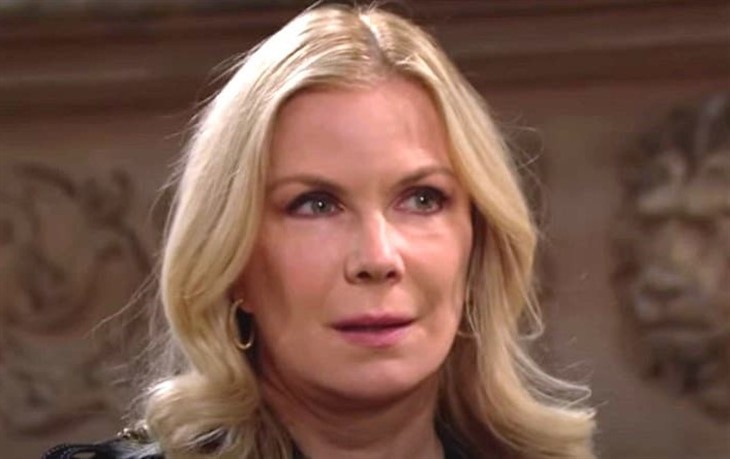 It seems to be a long shot, but once Sheila Carter’s champagne switch trick is exposed, Ridge could turn his anger towards Sheila and away from Brooke in upcoming episodes of The Bold and The Beautiful! If Ridge has already turned to Taylor Hayes (Krista Allen) and she’s fully taken him back, it could backfire on poor Taylor although the reasoning there is that alcohol only reduces inhibitions and what happened with Brooke was something already in her.

As for Sheila, she’ll certainly lose some friends she never really had in the first place – viewers of The Bold and the Beautiful know that while Taylor is nice to her, she’s not really a friend. Taylor’s nice to pretty much everyone, she is a caring person and she invited Sheila to Christmas so she could psychoanalyze her without her knowing it! As for Deacon Sharpe (Sean Kanan) he tolerates her but he already suspects she had something to do with Brooke’s fall from sobriety on New Year’s Eve and it had to do with the champagne, but he hasn’t quite figured it out.

Many fans of The Bold and The Beautiful are getting a little weary of the same old, same old storyline of something happening to break up Brooke and Ridge only for them to get back together and forgive. Sometimes it takes a few years and a couple of in-between romances or even marriages for it to happen, but it seems like they always reconcile eventually and they think since Sheila is the ultimate wrongdoer that Brooke should get a pass from Ridge!

But still, as Taylor would certainly argue as a psychiatrist and one who knows the ins and outs of human behavior both normal and abnormal, the alcohol didn’t bring out anything new in Brooke, the tendencies of man to man to man were already there! It would seem that Brooke is a romance addict, a danger addict, and quite possibly a sex addict – for a sex addict, it’s not exciting anymore when it’s not wrong, and you can’t get caught! That doesn’t mean that Brooke is not truly sorry for what happened, but part of her may be just sorry she got caught!

The Bold And The Beautiful Spoilers – Is The Bridge Broken For Good This Time?

Brooke and Eric were married twice, Brooke and Ridge have been married seven times, and she was even married for a short time to Thorne Forrester (Ingo Rademacher)! Plus she’s been married to four other men in between, including Dollar Bill Spencer (Don Diamont); but it does appear that the “Bridge” is broken for good this time, because Ridge has had enough!

Be sure to catch up on everything happening with BOLD right now. Come back here often for The Bold and The Beautiful spoilers, news, and updates

GH Spoilers: The End Of Peter August For Real?