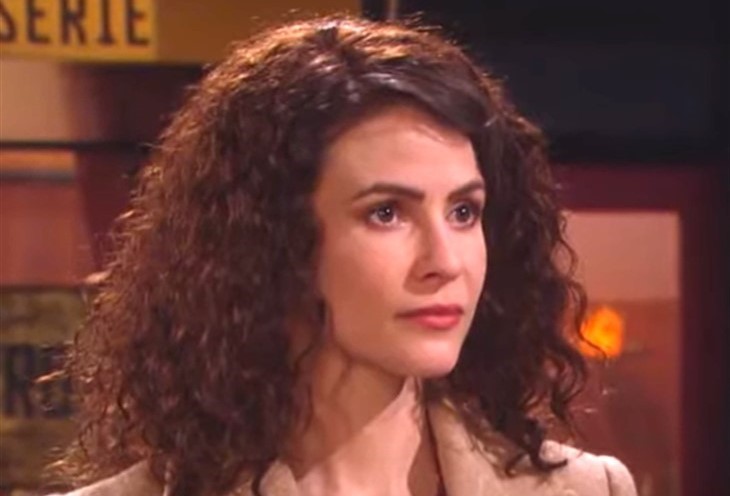 Days of Our Lives spoilers reveal a true step back in time when the soap returns from its Winter Olympics break on February 21, 2022. While we will see a few comebacks in Chandler Massey and Zach Tinker as Will and Sonny, we will also see a DiMera who was killed way, way, way back in 1983.

Days Of Our Lives Spoilers – A Blast From The 1980s Past

Sarah Horton (Linsey Godfrey) manages to get back to Salem next week and Xander Kiriakis (Paul Telfer) is shocked and wants to have more time to talk to her than when she allegedly showed up in Salem a few weeks ago to dump him in person. Of course, that was Gwen (Emily O’Brien) wearing a Sarah mask, so Xander still hasn’t spoken to the real Sarah for nearly a year.

It turns out the woman he sees in Horton Square next week IS indeed the real Sarah, but she doesn’t think so. Instead, she thinks her name is Renee Dumonde DiMera, daughter of the late Lee Dumonde (Brenda Benet) and Stefano DiMera (Joseph Mascolo). Longtime DAYS fans will remember Renee marrying Julie Williams’ (Susan Seaforth Hayes) son, David Banning, but then learning that Tony DiMera (Thaao Penghlis) wasn’t her brother after all because he wasn’t a real DiMera. Tony and Renee had been in love until they believed they were siblings.

The night Renee was killed by the Salem Slasher, she and Tony had made love and were making plans to be together. That’s when she was murdered and in the years since, Tony has gone back and forth over whether is really Stefano’s son or not. So, we may have a problem in 2022 Salem.

When Sarah tells Xander that her name is not Sarah but it’s Renee Dumonde and she is in love with Tony DiMera, he is quite confused, but imagine Tony’s confusion when a young woman calling herself Renee wants him back.

Kristen DiMera (Stacy Haiduk) explains to Abigail DiMera (Marci Miller) how that all happened. It seems when she kidnapped Sarah, she gave her a drug that she didn’t realize would make her delusional or give her amnesia. So, Kristen decided to give Sarah a diary and it happened to be Renee’s. And now Sarah thinks she is Renee, so this can get quite messy. Stay tuned to Days of Our Lives weekdays to see how this story plays out.