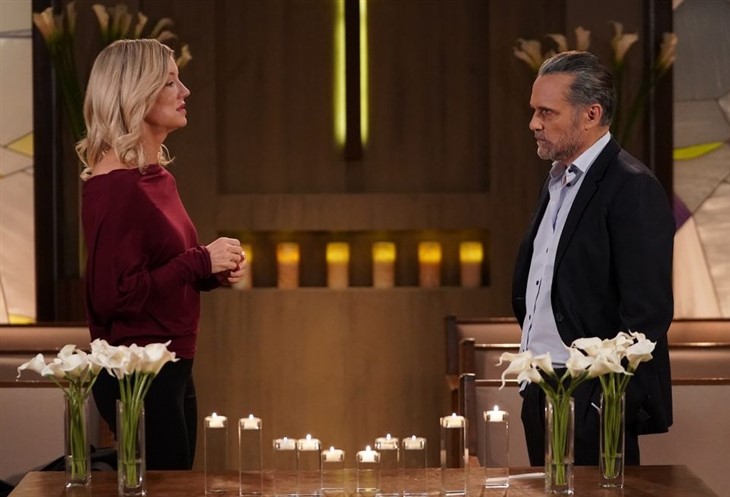 Carly Corinthos (Laura Wright) is ready to meet with a divorce lawyer once again and we guess she hopes Sonny Corinthos (Maurice Benard) won’t sleep with this one as he did with the last one. For some reason, Carly decides to whine to Felix (Marc Anthony Samuel) about all of her troubles because he must be the last one in Port Charles not to have heard about how her life is in ruins.

Meanwhile, Nina Reeves (Cynthia Watros) and Sonny meet again at Charlie’s Pub and Phyllis (Joyce Guy) does not like what she sees at all. Sonny doesn’t seem to care about that as he and Nina share a quiet table together. Nina warns Sonny that their spending any time together means something dangerous might happen, but do either one of them even care? It’s Valentine’s Day after all.

Terry Randolph (Cassandra James) thinks she is meeting her date at Charlie’s and that date looks like it’s Chet Driscoll (Chris Van Etten). Did Elizabeth (Rebecca Herbst) drop a hint for the audience when she used the word veteran?

Kevin Collins (Jon Lindstrom) also has a Valentine’s Day planned for Laura Collins (Genie Francis) and tells her that life is full of surprises. He also lets her know that good things come to those who wait, but does Laura have enough patience? In addition, TJ Ashford (Tajh Bellow) and Molly Lansing Davis (Haley Pullos) try to have a romantic night but he might have some information about his mother, Jordan. She may be coming home soon.

We don’t get Valentin Cassadine (James Patrick Stuart) on Valentine’s Day, but we do get Nikolas Cassadine (Marcus Coloma) and Ava Jerome (Maura West) sharing a romantic time. However, Spencer Cassadine (Nicholas Chavez) is shocked when his girlfriend, Esme Prince (Avery Pohl), is right there with him over at Hotel Jail.

No, she is not visiting for Valentine’s Day. She works there. And Spencer is pretty darn surprised to see she has an odd friendship with Ryan Chamberlain. What could Esme really be up to with him? Stay tuned to General Hospital weekdays to see how these stories play out.