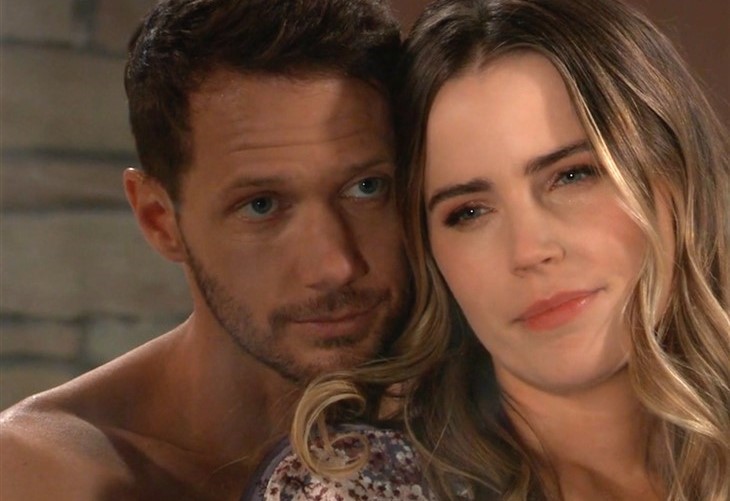 General Hospital (GH) spoilers and updates tease that Brando Corbin (Johnny Wactor) will say yes to the dress, the aisle, the chapel, and the rings in response to Sasha Gilmore’s (Sofia Mattsson) surprise marriage proposal in a recent episode of General Hospital – unaware that she’s taking drugs again to cope!

General Hospital viewers will recall that Brando and Sasha went on a Niagara Falls vacation, and slept together and woke up together for the first time since before their baby was born. General Hospital viewers will remember that the death of their newborn Liam Mike Corbin (uncast infant) was so traumatic that Sasha couldn’t stand to look at her baby’s father for a while. They hadn’t been together for a long time, as each one grieved their own different way – prompting her to give into her urge to take pills to cope with her pain on this trip! As they woke up together, Sasha was happier than she had been in a long time, and they got up and looked out the window of their hotel room at the falls – she didn’t want this trip to end! Sasha told Brando she didn’t want to go back to the real world, because the world they had woken up in was so beautiful and peaceful – Brando had told her he wished he could do that for her.

General Hospital viewers can imagine that Brando is caught off guard when Sasha impulsively wants to elope and get married that day, following his telling her that he wants to spend the rest of his life with her! General Hospital viewers will see him laugh a little, blindsided by her request and thinking she’s joking at first, but then he realizes she is absolutely serious, and says he isn’t sure what to say – she tells him to say yes! Brando is obviously happy to see Sasha so happy, after being so worried about her working through her grief for their baby by throwing herself into work – and avoidance of him, but then people do handle grief in different ways. Brando is likely thinking to himself that Sasha may be escaping her grief in a new way, but then she is happy – he hasn’t seen her like that in months!

General Hospital viewers will see Brando at first be hesitant, surprisingly enough, after fearing he was losing Sasha and now she’s going this totally other direction – General Hospital viewers can’t blame him. Brando considers if maybe Sasha is just caught up in the romance of Niagara Falls, and having made love for the first time in several months and waking up together. Under other circumstances he would jump at the chance to elope but he wants to make sure they marry for the right reasons; he questions her to make sure that she’s ready. Sasha tells him lovingly and convincingly that it is about Liam but it’s also about them – and she knows what she wants and she wants them together. Brando is finally convinced and he says yes!