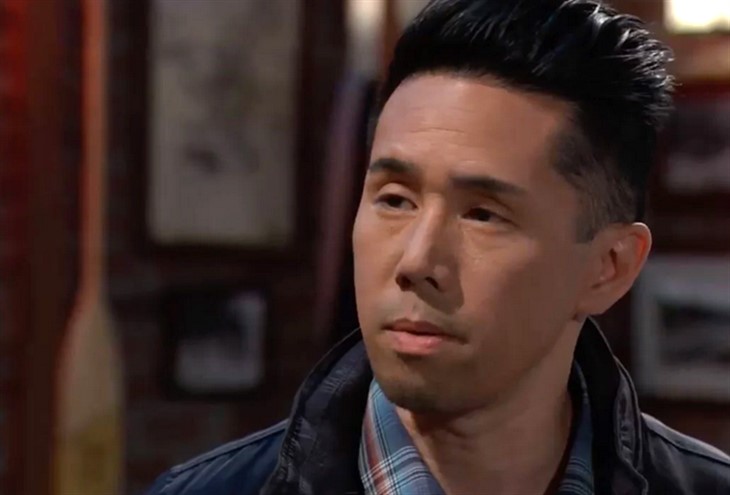 General Hospital (GH) spoilers indicate that Brad Cooper (Parry Shen) is terrified of his aunt Selina Wu (Lydia Look). Is the stress of working for Selina getting to Brad? Brad hasn’t been seen a lot lately but is expected to be at Selina’s beck and call. Is Brad acting out to relieve stress?

General Hospital spoilers reveal that Brad has never been completely violent before but he has done underhanded things. Brad even changed a dead baby to fool his husband and help Nelle Benson (Chloe Lanier). Brad has tampered with lab tests too. That is a far cry from attacking people with a hook but that doesn’t mean he hasn’t crossed the line.

Brad has never had to give up his friends and do exactly as he was told before. Attacking people could be the only way that Brad feels he is in control. Could Brad have completely lost it after being forced to allow Selina to control him? Perhaps Brad’s victims could be like attacking his aunt Selina every time.

Brad does not like being under Selina’s control at all. Brad was accustomed to living his life however he wanted until Selina helped to secure his release from Pentonville. Brad seems stressed every time he is on screen. Brad also feels that Selina is too controlling. Brad wants to work at the hospital, not in the mob. However, Brad is still stuck doing Selina’s bidding daily.

Will Brad ever get out from under Selina’s thumb? Selina has controlled Brad’s every move since he was released. Working for Selina is worse than being in prison. Selina even forced Brad to stand by as Cody Bell (Josh Kelly) was beat senseless. Brad knows that Britt Westbourne (Kelly Thiebaud) is attracted to Cody and doesn’t want anything to happen to him. Still, Brad is forced to continue to lie to his friend.

Adding to Brad’s stress is the fact that Selina is keeping him attached to the family business. Brad is on parole and doesn’t want to go back to prison. Brad may have had a break from reality because of this. Is Brad truly losing it because of everything he has been forced to be a part of?

Stranger things have happened to better people. Will it be revealed that Brad is the “Hook”? How many more innocent people will be attacked before he is stopped?