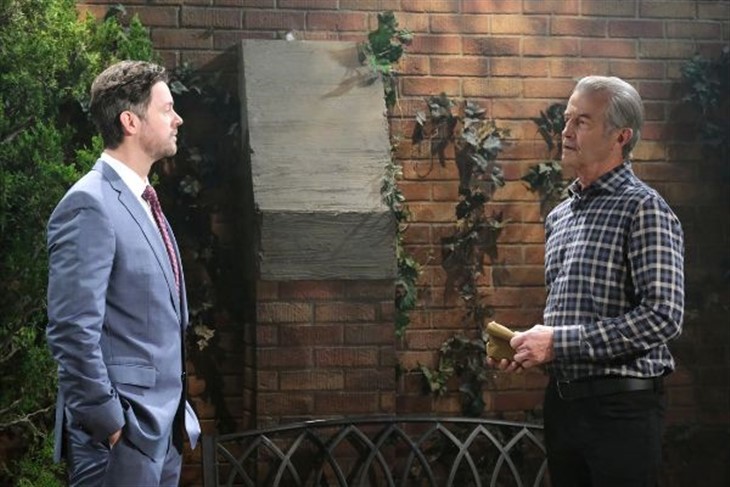 Days of Our Lives spoilers and updates tease that EJ DiMera (Dan Feurreriegel) might stop Chad DiMera (Billy Flynn) from taking deadly vengeance on Clyde Weston (James Read). EJ won’t care that much about Clyde, but he won’t want his brother to go to prison.

Days Of Our Lives Spoilers – I Smelled Vanilla

During the week of September 19, Sonny Kiriakis (Zach Tinker) will remember what will prove to be an important detail about his attempted murder. As Chad and Will Horton (Chandler Massey) try to help Sonny remember details of when he was stabbed in his office, he’ll remember smelling vanilla. This could mean that his attempted killer had been in a bakery, or he or she could be a baker, or perhaps had simply eaten something vanilla prior to his attack.

Interestingly enough, Clyde will show up at the hospital, and while he’s a short order cook at Brady’s Pub, he could come in contact with the flavoring. There are desserts on the menu there that could have vanilla as an ingredient.

The Days of Our Lives weekly preview shows Rafe Hernandez (Galen Gering) and Jada Hunter (Elia Cantu) looking at a computer screen together. It looks like they may be reviewing some security footage in an attempt to find some clues to the attacker’s identity. Jada will make a stunning discovery, which could mean she noticed the footage that was the basis of Clyde’s alibi had been tampered with. Someone could have tampered with it and edited it and her eagle eye may have noticed an edit mark. It looks like Clyde may again become a prime suspect as both Abigail’s killer and Sonny’s stabber and that will put him in danger from Chad.

Chad has been so overwhelmed with grief and anger, he swore he’d find the killer of his wife himself. Rafe has had to pull him back from vigilante justice on more than one suspect, and has in fact not let him into the questioning room anymore as a result. Once Chad finds out Clyde again is a suspect, it will be no different and he’ll go after Clyde to kill him himself, and grab a gun.

EJ will realize Chad’s beside himself during the week of September 26, and come to his rescue. This could mean he’ll rescue Chad from himself, making a mistake he can’t come back from, or possibly from being killed by the true murderer.