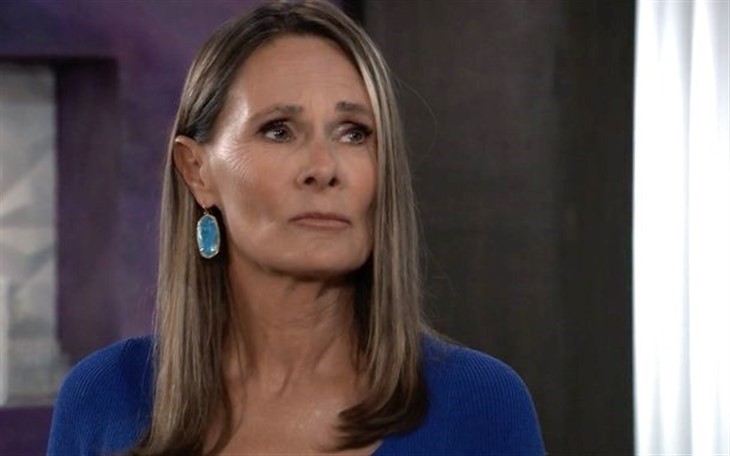 General Hospital spoilers and updates for Wednesday, September 21 tease there will be apologies, warnings, and danger. Someone apologizes and wants to make amends, someone is warned, and the Port Charles Hook lurks in the fog!

Lucy Coe (Lynn Herring) is critical of Brook Lynn Quartermaine (Amanda Setton) as she gives her some bad news. Brook Lynn is blindsided as she asks her to clarify that she wants to fire her. There are many changes going on at Deception Cosmetics with Sasha Gilmore (Sofia Mattsson) and Gladys Corbin (Bonnie Burroughs) out on leave.

One has to wonder if this is more about Brook Lynn and the company, or more about Lucy herself. She’s pulling double duty as head of the cosmetics company and a double agent, trying to charm information out of Victor Cassadine (Charles Shaughnessy).

Elsewhere, a brotherly conversation takes place between Harrison Chase (Josh Swickard) and Hamilton Finn (Michael Easton). Chase says to Finn that he could not be more wrong; perhaps talking about his situation with Elizabeth Baldwin (Rebecca Herbst). However, as a former Port Charles Police detective, Chase may be referring to Finn talking about the weapon used in recent attacks being a hook. Finn had overheard conversation meant to be private information and told their father, Gregory Chase (Gregory Harrison) and Alexis Davis (Nancy Lee Grahn). Now there’s an article in The Invader beckoning the attacker to write to the paper, and Finn may think he shouldn’t have blabbed, but Chase thinking it could help the case.

At the hospital, Portia Robinson (Brook Kerr) talks on a phone at the Nurses’ Station asking someone if there’s anything that she can do to help. She could be offering help for Brando Corbin’s (Johnny Wactor) upcoming funeral, or offering help to the Port Charles Police about how Brando died. She had asked Finn for a consult because she was suspicious about why he died when things were going so well.

Something of value to the investigation may come from Brando’s post-mortem. Port Charles Police Commissioner Jordan Ashford (Tanisha Harper) will receive new information, and that might be it.

At Charlie’s Pub, Valentin Cassadine (James Patrick Stuart) has a warning for Victor, telling him it’s not a good idea to provoke Sonny Corinthos (Maurice Benard). Valentin tells Victor he’d be making a big mistake, and Victor’s already been on Sonny’s radar in Ava Cassadine’s (Maura West) attack. Now that his cousin Brando has died, he may be suspecting Victor has something to do with it as well. Sonny will deliver another warning to Victor as well, so maybe he doesn’t listen so well.

Alexis talks to Sonny, wanting to know what she can do to make amends; this could be in reference to the article she is running about Brando’s killer and Ava’s attacker. The information about the weapon being a gaffing hook was not supposed to be public, and so Sonny is bound to have questions as to why it’s in her paper. She feels that it’s in the public’s best interest to know, but she also wants to draw the killer out with her challenge to write to the editor.

Alexis may be putting someone in danger with that challenge, possibly herself or her own family. Later in the week, she and Gregory make a gruesome discovery and the challenge in the paper could be why.

Curtis Ashford (Donnell Turner) is wary of Selina Wu (Lydia Look) to begin with, but now it looks like she’s taken notice of the article in The Invader. The article is shown as Selina makes a statement that it seems things are getting dangerous in Port Charles, and she may be concerned that she’s coming under suspicion. Just about anyone could be a suspect now, although Brando was able to provide a clue about hearing something jingling. Selina knows that she, Sonny, or any of her high paying customers in the poker game could be tied to the crimes-it’s just part of the mob life.

Anna Devane (Finola Hughes) appears to be standing outside her house in the dark foggy night, telling someone that she’s being careful. The person on the other end is probably Valentin, who she’ll also inform of a setback in their investigation into Victor. However, there is a different danger lurking nearby that she is apparently unaware of.

The Port Charles Hook is nearby, but this time the hook is in the right hand instead of the left. Are there two hook murderers attacking in Port Charles, or is he or she both handed?