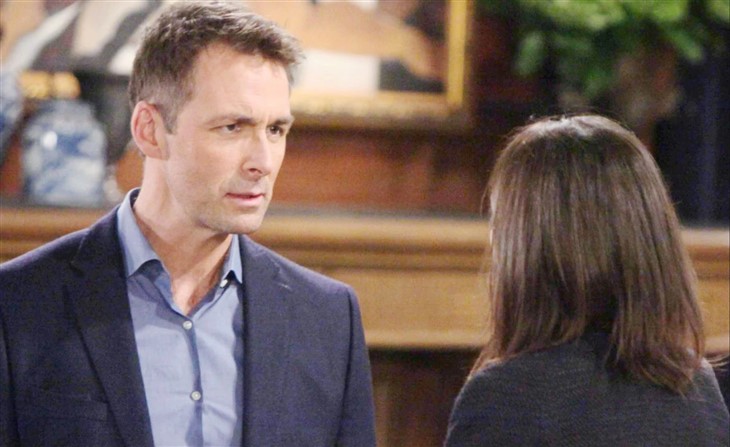 General Hospital spoilers and updates tease that Anna Devane (Finola Hughes) and Valentin Cassadine (James Patrick Stuart) will worry when they get updates about Charlotte Cassadine’s (Amelie McClain) school. There’s a good possibility that Victor Cassadine’s (Charles Shaughnessy) lied about the location to begin with, or else he’s moved her again, or the truth is even worse.

Valentin is so frightened that his father may be evil enough to possibly even have killed Charlotte, as Anna tries to comfort him. Valentin hasn’t been allowed any contact with his daughter except for texts, and he’s not even sure if she’s the one at the other end of the phone. Victor could easily be manipulating Valentin with no basis in fact, controlling him and blackmailing him when Charlotte’s not even alive.

Valentin recalls that Nina Reeves (Cynthia Watros) told him that she has been communicating with Charlotte and that she’s doing well and loves the equestrian program she’s in. But he cannot be sure that the communications are really with his daughter or if Victor is faking the whole thing, even with Nina.

GH Spoilers – They Must Find The Truth

Anna’s got Lucy Coe (Lynn Herring) trying to charm the truth out of Victor, but she knows that it’s a risky maneuver. Valentin isn’t sure that taking advantage of Victor’s obvious attraction to Lucy is going to do the trick; Victor doesn’t value his women, Liesl Obrecht (Kathleen Gati) a prime example. Anna says they have to find out the truth one way or another with no WSB help – it’s up to them and Lucy, even though she was reluctant to help. From everything Anna has learned about the school from contacts she has outside of the WSB, Charlotte is not enrolled-but she may not be under her real name. Valentin admits that Anna has a valid point there, but is reluctant to involve Nina in their search; but she does communicate by email with her.

General Hospital Spoilers – How To Get The Email Address?

Valentin tells Anna that he just went along with Victor’s story when he talked with Nina about Charlotte; saying that he, Valentin put her there to protect her from Victor. Anna says perhaps somehow they could get the email address without letting Nina in the loop or arousing her suspicions by either a keylogger or a thumb drive on her laptop. Distraction techniques would have to be used, but right now it would be easy, even though they’d have to take advantage of a tragedy.

Nina will be supporting Sasha Gilmore Corbin (Sofia Mattsson) at Brando Corbin’s (Johnny Wactor) funeral. That would be a good time to try and get the information from the laptop; Valentin hates to do it that way, but what has to be done must be done.