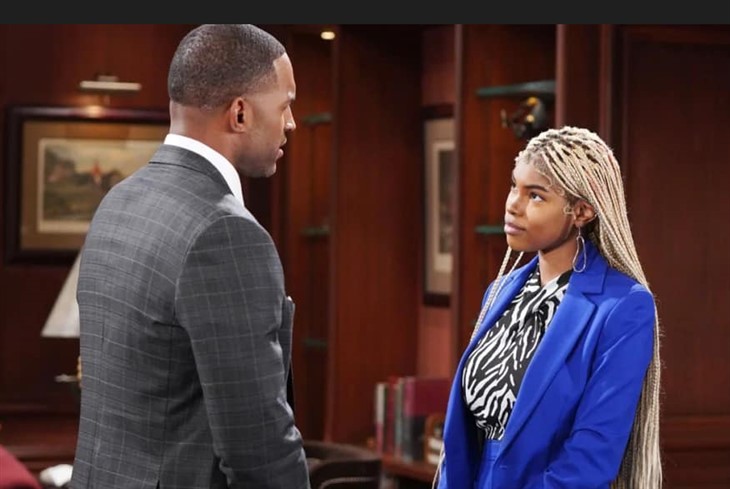 The Bold and the Beautiful (B&B) spoilers document that Paris Buckingham (Diamond White) has fallen hard for Carter Walton (Lawrence Saint-Victor). His recent change of heart, in deciding to propose marriage, was sparked by another woman.

Quinn Fuller (Rena Sofer) is someone Carter fell hard for in the recent past. That unexpected connection led to a torrid romance. But it ended because Quinn learned about Eric Forrester’s (John McCook) ED diagnosis and felt obligated to support him.

But Quinn’s loyalty was based on her belief that he was practicing fidelity. He was not, as Donna Logan (Jennifer Gareis) and Hope Spencer (Annika Noelle) know. But Quinn and Bridget Forrester (Ashley Jones) are teased to learn the truth on B&B.

The Bold And The Beautiful Spoilers – Who Is Right For Who?

Eric and Quinn were right for each other in daytime days gone by. Despite the Forrester family’s collective belief that Quinn was all wrong for Eric, she was not.

The enduring romance that Eric and Quinn enjoyed was real. While they did not seem like the ideal pairing or one that fit, they worked because of the genuine love they had for each other.

Yes, Quinn kissed Ridge Forrester (Thorsten Kaye) on the beach, which Brooke Logan Forrester (Katherine Kelly Lang) witnessed. But nothing happened beyond that, and such is soap.

Paris may be forced to admit that her mother was not being nosey soon. Grace Buckingham (Cassandra Creech) was wrong about her older daughter, Zoe Buckingham (Kiara Barnes), and Carter. Zoe, not Carter, wrecked that engagement.

But Grace is right to fear that Saint-Victor’s character will hurt Paris. Developments are about the unfold that will implore Quinn to seek Carter’s consolation.

Grace tagged Carter as a guy who was playing the field. She felt he does not love Paris but was using her, and she is right.

The Bold And The Beautiful Spoilers – Paris Buckingham Says No

Paris has demonstrated in the past that she is not a pushover. While sweet and agreeable, regarding Forrester Creations’ corporate culture, Paris stands firm where her principles are concerned.

If Paris receives Carter’s proposal, she will feel he is her destiny. Any reversal of his promise feels likely not to be accepted. Instead, Paris will fight for the man she loves, with Zende Forrester Dominguez (Delon de Metz) likely serving as an alternative landing spot because he does love her.