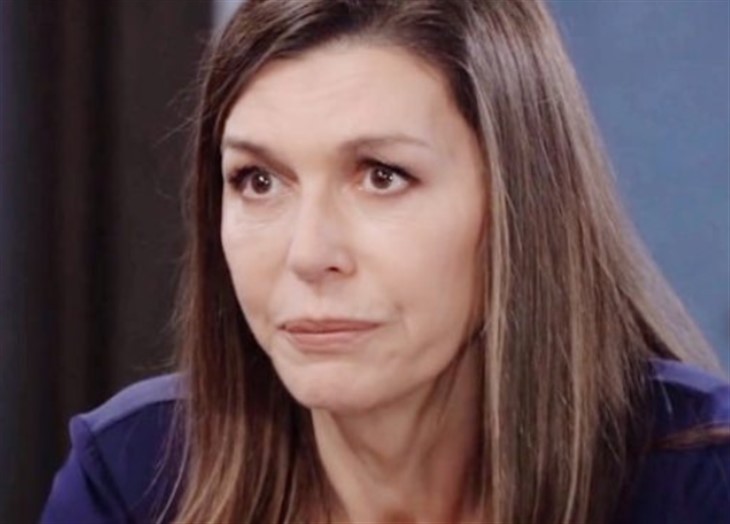 General Hospital (GH) spoilers reveal Anna and Valentin continuing to play their game of cat and mouse around each other, but Anna may find herself with more questions than answers when she does some investigating.

General Hospital Spoilers – What Has Anna Devane Been Up To?

Anna Devane (Finola Hughes) is beginning to suspect that Valentin Cassadine (James Patrick Stuart) was not in a rehab center when he claimed he was septic after the garbage bag incident, so she tries to find out where he really was. Like, um, perhaps he was in French Polynesia pretending to be a French captain with Jennifer Smith (Holly Gagnier).

She runs into problems when Victor Cassadine (Charles Shaughnessy) overhears her asking questions, so he begins to ask her even more questions and Anna finds herself playing similar games with both husband and son. It’s also becoming more clear to the audience that Victor is forcing Valentin to do his bidding when he really does not want to.

GH Spoilers – What Do Anna DeVane  And Victor Cassadine Want To Know?

Both Anna and Victor dance around one another, trying to figure out what the other is up to. “They have their theories about one another,” Charles Shaughnessy said in the July 12, 2022, issue of Soap Opera Digest. “She knows that Victor is up to something and she’s a chess player like him. They are meeting each other on the board four or five moves down the road.”

What Anna doesn’t know is that Victor ordered Valentin to take care of Laura Collins (Genie Francis). When he is unable to do that, Victor is not happy at all and wonders if his son has gone soft.

“He is not happy at all,” Shaughnessy said. “He realizes that he has to put more pressure on him. He is disappointed, but it gives him information. There’s a moral compass to Valentin that he wasn’t sure existed. He gains an extra layer of insight into his own son and what he may and may not be able to ask of him in the future.”

Well, fans already knew this about this charming man. He has always had a soft spot for Anna and has always been devoted to his daughter, Charlotte. And he never even killed Nikolas Cassadine after all. Stay tuned to General Hospital weekdays to see how this story plays out.