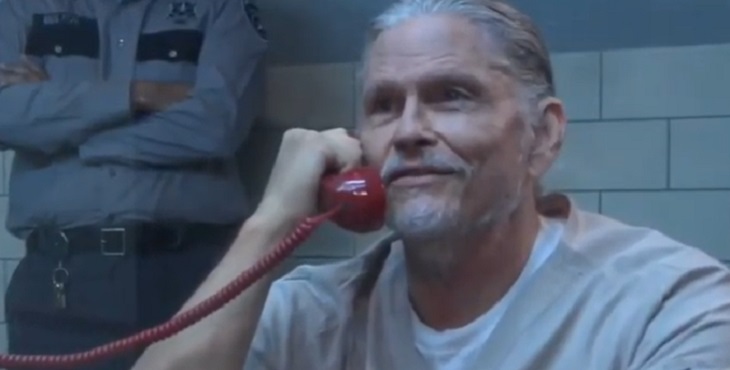 Longtime General Hospital viewers will recall that Frank Smith originally ran Sonny Corinthos’ current territory in Port Charles, the one that Cyrus Renault is trying to take over. Luke Spencer (Anthony Geary) had also worked for Frank Smith before Laura Webber, now Laura Collins (Genie Spencer) came into the picture, and then Luke left his criminal activities and the couple tried to have Frank arrested, which is why he then came after them and they were on the run for twelve years. This took place in the late 1970s.

Sonny came to town much later, in the early 1990s, first as a lower level “employee” of Frank Smith, running a club called “The Paradise Club” for Frank. Sonny was a much different Sonny in those days, feeding one of the strippers, Karen Wexler (Marie Wilson) drugs to keep her working there. After Luke killed Smith as he held a very pregnant Laura in front of him as a human shield – she was carrying Lulu Spencer (Emme Rylan) at the time – Sonny took over the territory.

This time period is when Sonny, Luke, and Laura became friends as well. However, Smith was not as dead as they thought he was, and he would reappear alive over twenty years later, but not in Port Charles – in Vancouver, Washington.

In 2015, Holly Sutton (Emma Samms) requests Luke’s help – their son, Ethan Lovett (Nathan Parsons) has been kidnapped. Luke tracks him down to a warehouse in Vancouver, Washington, and Holly, Laura, Lulu and Dillon Quartermaine (Robert Palmer Watkins) are with him on the trip. Luke finds Ethan is being forced to keep his foot on a pressure bomb, and he is able to disable the bomb and so Ethan can step off of it, but then the kidnapper’s henchmen move in and hold Ethan, Laura, Luke, Holly, Lulu and Dillon all hostage at gunpoint!

The kidnapper is then revealed to be a not so dead Frank Smith, in a wheelchair, who still has a grudge against Luke and Laura. Frank then threatens to shoot someone and Ethan ends up with a bullet in his arm. Afterwards, everyone but Luke and Laura are let go and Holly takes Ethan to the hospital as Luke kills Frank – and makes sure he’s dead this time – to save his loved ones.

The only one left alive in the Smith family by that time was Jennifer Smith (Holly Gagnier) who had left with her goons after having had tried to get Luke to sleep with her in exchange for releasing Lucky Spencer, (Jonathan Jackson) who she had lied about kidnapping!

General Hospital Spoilers: Cyrus Renault Was Based Out Of Seattle, Washington, Frank Smith Had Moved His Operations To Vancouver, Washington

We cannot be sure if Jennifer Smith took over her father’s territory in Washington State or not, but we know that Cyrus Renault had been based out of Seattle, Washington. The two cities are only a three hour drive from one another so it is very possible that Cyrus may either have taken over Frank’s territory in Washington State in a hostile manner, possibly taking out Jennifer if she had taken it over first, or like Sonny, Cyrus may have been working for Frank.

Considering the amount of knowledge that Cyrus has about Sonny, and Mike Corbin (Max Gail) it is a very good chance that Cyrus learned about him either from Frank himself before he was killed, or possibly from Jennifer. Jennifer Smith appeared to only have interest in Luke Spencer, not in running her father’s territory so while she and Cyrus could be connected, he has been calling the shots.

Cyrus seems also to be more familiar with Laura than he should be only having met her a few times when she has confronted him in prison and once or twice since he was released. Since Sonny took over Frank’s territory in Port Charles, it is quite likely that Cyrus was connected to Frank Smith in the past and possibly still connected to Jennifer.

Stay tuned to GH, and keep checking General Hospital spoilers frequently for all the latest news, updates and developments.