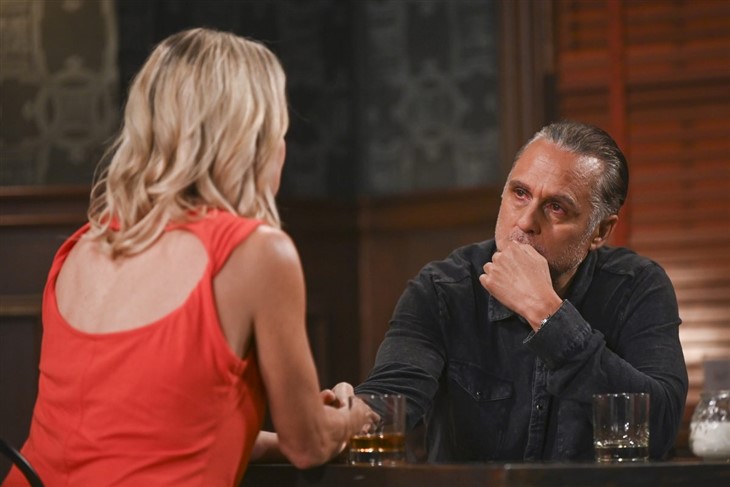 General Hospital (GH) spoilers for Wednesday, January 26, 2022, reveal Nina Reeves doing everything she can to make sure Sonny survives the night without his meds.

For some reason, Nina (Cynthia Watros) is the only person to notice Sonny Corinthos (Maurice Benard) is off his meds. Carly Corinthos (Laura Wright) suspected it but Sonny brushed her off and changed the subject and she forgot the thought ever came into her head because it wasn’t about her. However, now Nina is at a loss as Sonny continues his manic ways yelling at her to leave him alone.

That prompts Nina to get on the phone to Phyllis (Joyce Guy) and tell her what’s happening. She dealt with this once before and was able to help Sonny. Can she do it again?

Meanwhile, Carly attempts to have some alone time for herself to collect her thoughts about herself when Ava Jerome (Maura West) rudely interrupts. Will Carly ever have a moment to wallow in her self-pity?

Peter August (Wes Ramsey) demanded that Victor Cassadine (Charles Shaughnessy) bring him his Louise or at least some inkling as to her whereabouts, so he tries to bring him a sonogram only to be stopped by Britt Westbourne (Kelly Thiebaud). Since she is the one who took the sonogram picture, she is quite intrigued.

Britt also has to stop in and see Peter to give him some news and Peter does not look happy to hear what she has to say at all.

Maxie Jones (Kirsten Storms) is also faking a search for Louise at that cabin in Pawtuck with Felicia Scorpio (Kirstina Wagner) and Austin Holt (Roger Howarth). This story better end soon because it also looks like Harrison Chase (Josh Swickard) is getting pretty attached to a baby that is not his.

After weeks and weeks of talking about it, Josslyn Jacks (Eden McCoy), Cameron Webber (Will Lipton), Esme Prince (Avery Pohl), Spencer Cassdine (Nicholas Chavez), and Trina Robinson (Sydney Mikayla) finally head off to Sonny’s cabin where Esme is armed with some opioid drugs. What does she plan to do with them and will this lead to Joss and Cam NOT losing their virginity, which is what they so badly want to do? Stay tuned to General Hospital weekdays to see how these stories play out.