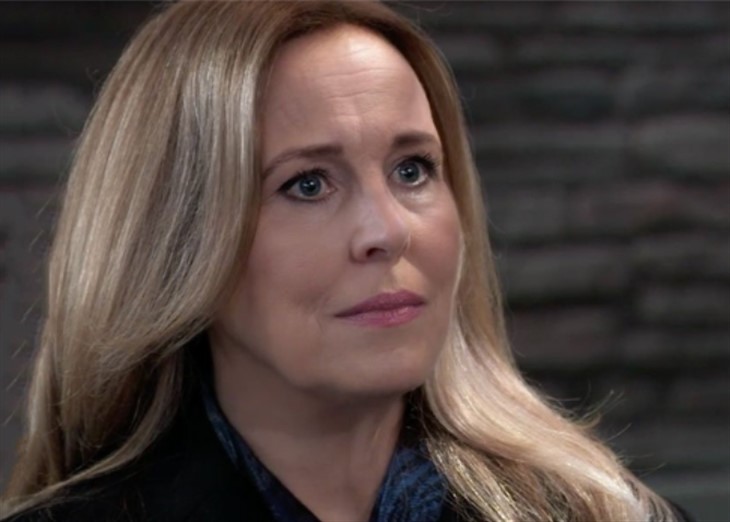 General Hospital spoilers and rumors tease that Laura Collins (Genie Francis) may be the one to get Tracy Quartermaine (Jane Elliot) out of jail so she can attend Luke Spencer’s (Anthony Geary) memorial in an upcoming episode of General Hospital!

General Hospital viewers will remember that Tracy had gone on the lam after setting up Alexis Davis (Nancy Lee Grahn) for a drunk driving incident; even though it was what Tracy considered “tough love” it was still a frame-up! That isn’t what Alexis recently got pardoned from Spring Ridge from, however, since Alexis was never charged; she was charged for stabbing Dante Falconeri (Dominic Zamprogna) with a syringe.

This was when he got between her and Franco Baldwin, (Roger Howarth) who she’d really been going after, although her drinking did drive her to do that, as General Hospital viewers will recall! When Tracy came back to Port Charles to notify her family and friends of Luke Spencer’s (Anthony Geary) death, Alexis and her daughter Sam McCall (Kelly Monaco) saw her in the Metro Court and Sam called Dante to come arrest her!

General Hospital spoilers show that Tracy has devastating business to take care of; she is a big part of setting up Luke’s memorial service, and even though other family members can help, she’s his widow! General Hospital viewers can imagine when word of her arrest and jailing reach Laura, who is the mayor of Port Charles, Laura just won’t think that is appropriate at all!

A man’s widow should be the one who is comforted and supported in her time of grief and loss, not be uncomfortable in a holding cell having lost her freedom! Tracy is the one who received Luke’s “effects” or his belongings, and she is the one who should decide how his remains, if there were any found, should be taken care of. General Hospital spoilers tease that Tracy will have an urn which presumably contains Luke’s ashes, and the family and friends of Luke will gather on The Haunted Star to say goodbye.

As mayor of Port Charles, Laura does have some strings she can pull to at least get Tracy released for Luke’s memorial, even if it is only for that day. General Hospital viewers will see Ned Quartermaine (Wally Kurth) try to help with a legal matter, and that is probably going to be arranging for his mother’s bail, although Laura may be able to get the charges dropped.

For one thing, it was Sam who wanted to have Tracy arrested for setting up her mother Alexis, and Sam is dating the arresting officer; that could possibly be considered a sort of conflict of interest. Although Alexis should have known that, she didn’t bring up the subject when she heard Sam call Dante to come arrest Tracy-she didn’t say the word “arrest” but she told him it was urgent! More than likely though, Laura will arrange for Tracy to be freed with bereavement as a mitigating circumstance, but she may also approach Alexis to drop the charges as well!

Sister Wives Spoilers: Is Christine Brown Rich Or Just Realizing Her Self Worth?