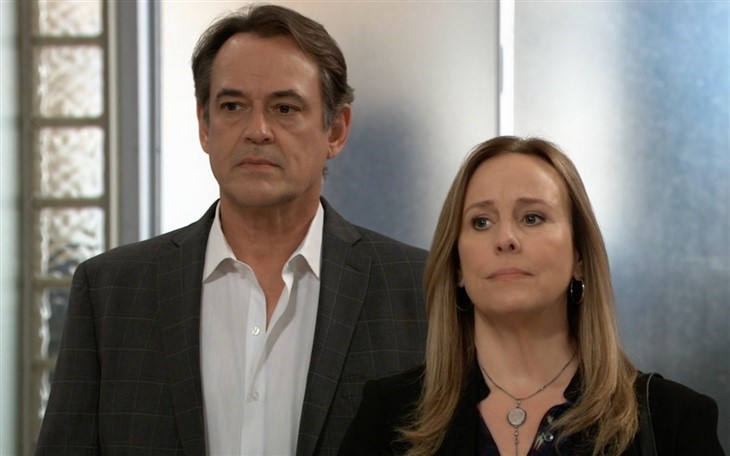 General Hospital (GH) spoilers tease that Mayor Laura Collins (Genie Francis) just returned to Port Charles after months of isolation while being in a witness protection program along with her brother Martin Grey (Michael E Knight). While neither one of them were about to make any kind of revelations in court, their imprisoned brother Cyrus Renault (Jeff Kober) had apparently put a hit on them both. But after one failed assassination attempt, Laura had enough and confronted Cyrus in prison!

Laura wasn’t prepared for the things that came out of Cyrus’ mouth. First of all, he claimed to have found religion which Laura outwardly scoffed at. Then, when she brought up the hit on her life, Cyrus warned that he wasn’t responsible and that Laura was still in danger! Laura wasn’t sure whether or not to believe Cyrus, but recent event make it seem as if he were telling the truth for once!

Laura and her husband, Dr Kevin Collins (Jon Lindstrom) almost made it through the holidays without any major tragedies happening to them, or their loved ones and were eagerly awaiting their upcoming Parisian holiday. But Tracy Quartermaine (Jane Elliot) arrived late on New Year’s Eve to let Laura know that her former husband, Luke Spencer (Anthony Geary) had been killed in a cable car accident in Austria. Even though they haven’t been married for years, the news still hit Laura hard. Even though it has seemed like an accident, Victor Cassadine (Charles Shaughnessy) received a mysterious call not long after.

General Hospital Spoilers – Victor Cassadine Is Responsible For All The Recent Tragedy!

Although it isn’t yet known who was on the other end of that call, Victor told them that the hit on Laura was no longer necessary since Luke had been “neutralized”. Perhaps thinking the worst is behind them, look for Kevin and Laura to go forward with their vacation plans! It seems quite possible that a believed dead Luke will make contact with Laura somehow, perhaps even in person. Luke’s arrival or even just a warning from him might put Laura, and even Kevin in just as must danger as ever. Who knows what kind of horrors Victor and his unknown partner have in store for Laura, Kevin and maybe even Luke himself!

Is Victor done with Laura? Or could Paris bring more danger to the couple? Will Luke turn up alive? Anything can happen in Port Charles so stay tuned to General Hospital airing weekdays on ABC. And don’t forget to check back right here regularly for all your General Hospital news, information and spoilers!