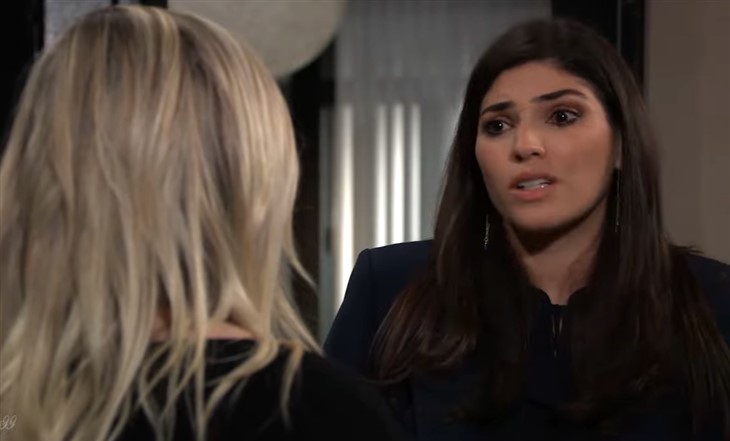 General Hospital (GH) spoilers for Thursday, January 13, 2022, reveal Brook Lynn and Maxie are about to separately go into freak-out mode as their secret gets closer to coming out — with Peter getting closer to being free.

It didn’t take long for Tracy Quartermaine (Jane Elliott) to be freed from jail and go track down Brook Lynn Quartermaine (Amanda Setton) to tell her she knows all about Maxie Jones’ (Kirsten Storms) baby being little Bailey. And now BLQ knows that it’s only a matter of time before their secret is out in the open.

She runs to Harrison Chase (Josh Swickard) to lament, but even he knows he is no match for Tracy Q. Maybe they should have let Maxie tell Valentin Cassadine (James Patrick Stuart) the truth. And speaking of Valentin, he is about to team up with Austin Holt (Roger Howarth) and it turns out Austin knows more tidbits than Valentin imagined about Brook, Maxie, the baby, and all the Qs.

GH Spoilers – Maxie Jones Has Her Own Problems

Meanwhile, Maxie has to make sure Anna Devane (Finola Hughes) stays off the Louise trail. Now that Felicia Scorpio (Kristina Wagner) and Anna vowed to bring Louise home, Anna is relentless with Maxie, but she also needs Maxie’s help. Will Maxie end up giving her a false lead?

At the hospital, Felicia starts looking for information from Austin, as he was the one who delivered Louse, after all. She also pays a visit to Peter August (Wes Ramsey) and he is surprised to see this woman who could have been his mother-in-law.

At the Metro Court, Drew Cain (Cameron Mathison) and Victor Cassadine (Charles Shaughnessy) come face to face for the first time since Crete and Drew tells his captor there are a few things they need to discuss. Little does Drew know that Victor might be able to control his mind again — with the help of Peter.

Finally, Britt Westbourne (Kelly Thiebaud) and Brad Cooper (Parry Shen) have lunch together and Britt finally begins to understand how hard the last few years have been for her friend. Stay tuned to General Hospital weekdays to see how these stories play out.

Days Of Our Lives Spoilers: A Clue In The Search For Sarah