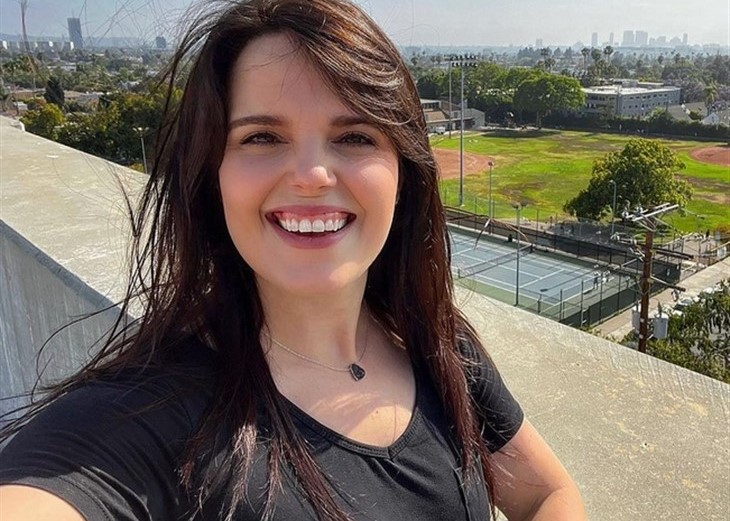 Look who is getting married! Former GH soap star Kimberly J. Brown had some exciting news to share on social media. She revealed that she just got engaged to a fellow actor. “Have I introduced you guys to my Fiancée?” she asked as she revealed that she said yes to her partner, Daniel Kountz.

Brown began acting in commercials for the Ford Agency at the age of five. She appeared in her first Broadway project when she was seven years old and made history by being in three Broadway shows by the age of nine: “Four Baboons Adoring the Sun”, “Les Miserables” and “Showboat”. Brown is best known for playing Marah Lewis on Guiding Light for which she earned a Daytime Emmy nomination at 11 for her portrayal of the character during her tenure on the show.

After 15 years of being absent from the soap opera genre, Brown returned in 2021 when she was hired on General Hospital to play the role of Nurse Chloe Jenkins. Chloe was the nurse hired by Peter August (Wes Ramsey) to keep an eye on Maxie (Kirsten Storms) and help with delivering their baby. She was later revealed to be a fake Chloe and her real name was revealed to be Marie Hopkins.

Kountz and Brown are both actors. He has been on shows such as; Youthful Dayze playing Connor Phillips, the series has a number of former soap stars as cast members. He also did television shows like; My Crazy Roommate, Mad Men, Ghost Whisperer, Quintuplets, EJ, JAG, and more. Kountz outside of acting is also a realtor.

Brown’s additional credits include; Rose Red, Law & Order: Special Victims Unit, Unhappily Ever After, Touched by an Angel, Vampire Princess Miyu and so much more.

We wish to take this moment to congratulate Brown and Kountz on their engagement and upcoming wedding. So, fans, would you love to see her back on General Hospital as Marie Hopkins? Would you rather see back on the show in a new role? Please send the happy couple congratulations and well wishes on social media as they celebrate their engagement.