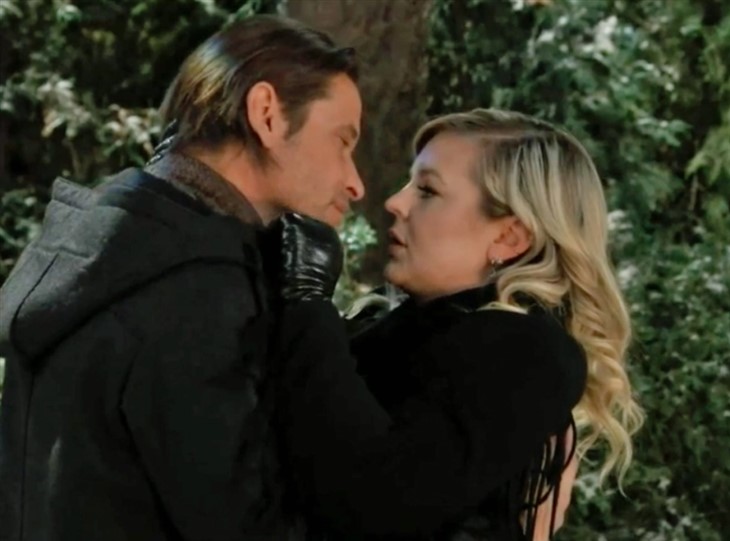 While it’s nice that Austin might have a storyline soon involving a mystery person he met in the woods, it’s still been weeks since we have seen anything about that story and it might be weeks until we hear anything more. This is GH and that is just the way things are done. But whether there is a mystery person following him and Maxie or not, Austin and Maxie just do not seem meant to be.

It’s not for lack of talent on Kirsten Storm and Roger Howarth’s part, but the actors do not have much chemistry together aside from friendship chemistry. There is just nothing romantic there and GH needs to stop forcing it. The character Austin really clicks with is Britt Westbourne (Kelly Thiebaud), but unfortunately, the soap decided she needs to be with Cowboy Cody Bell (Josh Kelly). Oh, Roger Howarth also has chemistry with Rebecca Herbst, but nope, we’re not bitter.

Before Peter August (Wes Ramsey) was ever really dead and not wreaking havoc over Port Charles anymore, GH apparently decided Maxie needed a new love interest immediately, so why not give her yet another man who delivers her baby in the woods? That’s how she ended up falling for Peter and that’s who she met Austin and sorry, but this trope didn’t work the first time, so why would GH think it would work now?

Not every character needs a love interest at every moment and Maxie could have at least had a six-week postpartum period before they decided to pair her with a character who looks just like Elizabeth’s recently-departed husband who Peter killed because Maxie spent two years defending the man.

Maxie also spent nearly a year lying to Austin about where Bailey Lou really ended up and who really knocked him out cold the night that Austin delivered her. Yes, there is some real trust in that relationship and so much to build on. There is nothing about the Austin and Maxie pairing that makes sense and GH needs to cut its losses soon. Stay tuned to General Hospital weekdays to find out if it does.