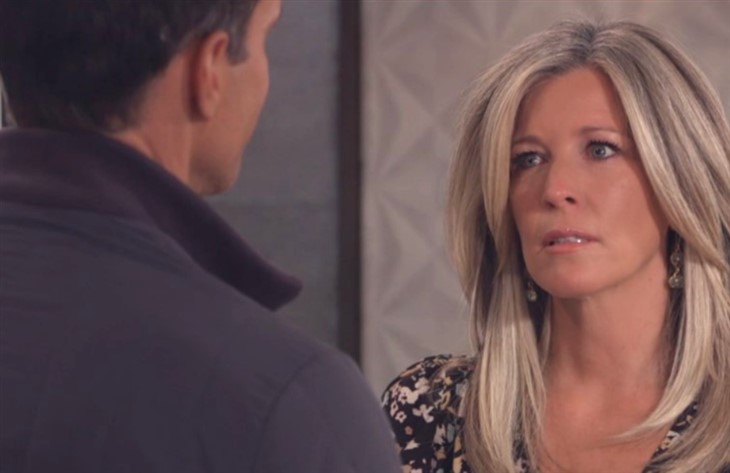 General Hospital spoilers reveal Drew and Carly continuing to bond as they try to salvage a friendship that was never a real friendship to begin with.

Carly Corinthos (Laura Wright) and Drew Cain’s (Cameron Mathison) entire close friendship revolved around the fact that she thought he was her beloved Jason Morgan and even Drew thought that for a while. If GH didn’t rewrite even more history, Drew should still have all of Jason’s memories as well, but he certainly doesn’t act like it.

When the OG Jason Morgan returned and Carly realized this other man was really named Drew Cain, that was the end of their friendship. For the next two years, Drew was nobody but the father of her daughter’s dying boyfriend. He was more like an acquaintance than a friend.

His true friends at that time were Franco Baldwin (Roger Howarth), who was inexplicably killed); Elizabeth Webber (Rebecca Herbst), who needs a friend rather than a creeper right now; and Curtis Ashford (Donnell Turner), who we never see Drew with. Carly wasn’t even a thought in Drew’s mind and Drew was never a thought in Carly’s mind, so why they are bonding now as if they had always been close is beyond us.

GH Spoilers – The Chemistry Isn’t There

As Drew and Carly try to rebuild a friendship the writers think once existed, we are also reminded that these two just don’t have any chemistry together and that’s a big problem. Their obsession with one another seems so forced that it’s painful to watch at the moment. Drew spent two years in a Grecian prison just so he could spend his life trying to rescue Carly and be a corporate mogul with Carly’s dumbass son. That makes no sense.

If we are to see Drew and Carly as the next hot couple, let them discuss how much Carly once hurt Drew when she learned he wasn’t Jason. Let them deal with that and let their relationship be organic and come from character rather than just a plot device because Steve Burton refused to comply with Disney/ABC’s COVID vaccine mandate and had to be written out of the show at the last minute. If a soap romance is going to work, it needs to make sense and this does not. Stay tuned to General Hospital weekdays to see how this story plays out.