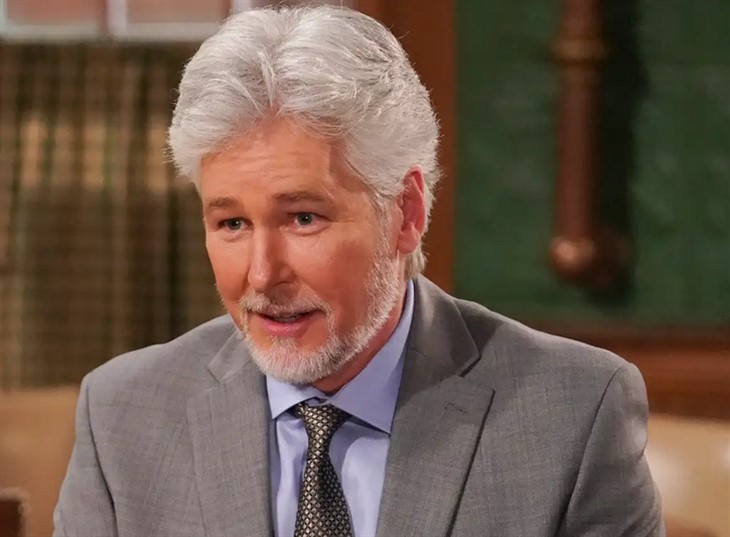 General Hospital star Michael E. Knight has been thrilling ABC daytime fans since the early 1980s with his quirky brand of humor he infused into a legendary character who stood the test of time on All My Children.

The role of Tad Martin brought Michael E. Knight three Daytime Emmy Awards — two in a row in 1986 and 1987, and another one in 2001. And Tad is still one of the most memorable characters in soap opera history thanks to Knight’s talents. After all, who can ever forget his first ‘cad’ move where is slept with both Liza Colby (Marcy Walker) and Marian Colby (Jennifer Bassey), her mother.

While appearing on Maurice Benard’s (Sonny Corinthos) YouTube mental health show Maurice Benard: State Of Mind, Knight explained how his character went from a cartoon lothario to the humorous, endearing character we learned to love so much.

“I was supposed to be God’s vengeance on Marcy Walker[‘s Liza] for being evil to my sister [Jenny],” Knight told Benard about why he was brought onto the show. After all, Liza tried her best to always keep Jenny (Kim Delaney( away from Greg Nelson (Laurence Lau), who became her husband. Unfortunately, Jenny died when a jet ski exploded on their honeymoon.

“They used to give me lines like, ‘I really dig you, baby. I’m not feeding you a line, I’m giving it to you straight,'” Knight continued. “I went to [the executive producer] and told her, ‘I can’t say this and not sound like a total a–hole,’ he continued. So, I said, ‘If he’s gotta be such a jerk, can I make him funny?’”

And that’s how Tad the Cad was born.

In 2022, Knight plays another funny soap character named Martin Grey, a lawyer who has worked for both Valentin Cassadine (James Patrick Stuart) and Nelle Benson (Chloe Lanier), but who turned out to be Laura Collins’ (Genie Francis) long-lost brother she’d never even heard of. Martin was introduced as a shady attorney, but we got to see his vulnerable side with his mother, and with his crime boss brother, Cyrus Renault (Jeff Kober).

He is also involved in a new romance with Lynn Herring’s Lucy Coe. Knight has also given Marty a southern accent, which makes him all the more endearing. Stay tuned to General Hospital weekdays to see what Tad Martin Grey does next.

The Young And The Restless Spoilers: Team Phyllis Or Team Diane?