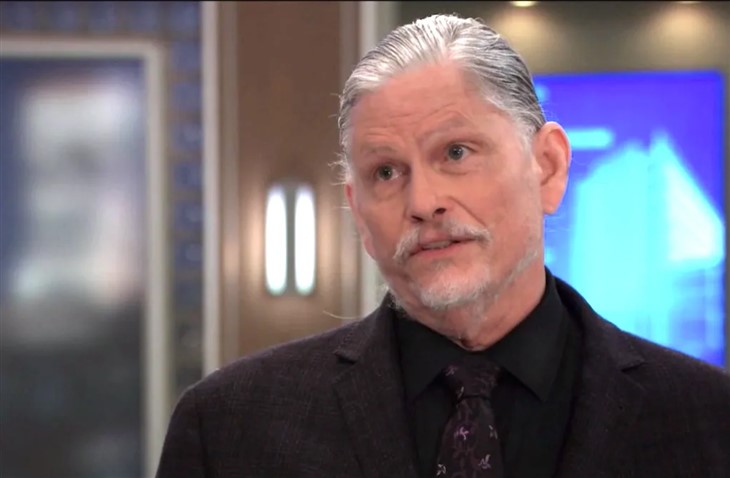 Cyrus is on the good side this time and wants to help the police and his sister, Mayor Laura Collins (Genie Francis); he still has a hotline to everything mob, though! He told Laura about the west coast threat that was intending to take over Port Charles; that turned out to be Jennifer Smith (Holly Gagnier) and her west coast associate. Jennifer may be in WSB custody, but her associate may carry out their plans to regain her father’s old territory taken over by Sonny Corinthos (Chad Duell)!

Laura didn’t want to believe that Cyrus had reformed, having a come-to-Jesus moment while behind bars in the Midwestern federal prison. She laughed in his face, although he seemed very sincere; he had also warned Laura that she and their brother Martin Grey (Michael E. Knight) were in danger.

Cyrus may be released early due to prison overcrowding; now, instead of his family’s enemy he becomes their protector! He has his and Martin’s mother, Florence Grey (Annie Abbott) in a safe place and he has let Martin know where she is – there are no more secrets between the brothers.

Cyrus has a difficult time convincing Laura he’s for real, but when he hears a catastrophic threat is coming he’ll be right by her side, and wants to fight against it! This time it’s not mob trouble – it’s a political threat, and threatens to unseat Laura from her position of Mayor of Port Charles! Cyrus is in an excellent position to work as a double agent – much as Brando Corbin (Johnny Wactor) did as his driver.

Amid much skepticism, Cyrus must prove he’s changed – just talking the talk doesn’t mean anything if he can’t prove he’s walking the walk! Cyrus takes on a challenge to prove himself by delivering some secret mob intel he’s heard through the pipeline to Port Charles Police Commissioner Jordan Ashford (Tanisha Harper). Convincing Jordan to trust him is the real litmus test, and he wants to pass muster with Marcus Taggart (Réal Andrews) as well.

Jordan and Taggart had worked together in a Drug Enforcement Agency takedown team with a few others to bring Cyrus to justice; but they had planted evidence. This was why previously Jordan was in Cyrus’s pocket so to speak and she had to do his bidding.

Cyrus finally is able to prove himself by exposing and bringing to justice the threat to the Mayor’s office and to Laura herself! It turns out that the threat is from within; Cyrus brings intel that Deputy Mayor Eileen Ashby (Heather Mazur) is working with Victor Cassadine (Charles Shaughnessy)! However, she is a hard nut to crack because she won’t spill on anything she knows Victor has done; but there’s proof on her phone of her calls. Laura still suspects he has something to do with the murder of Luke Spencer (Anthony Geary) but she still can’t prove it although Cyrus suspects the same. Cyrus also suspects that he’s behind the attack on Laura and Martin!

B&B Spoilers: Bill Stunned As Katie Moves On With Thomas