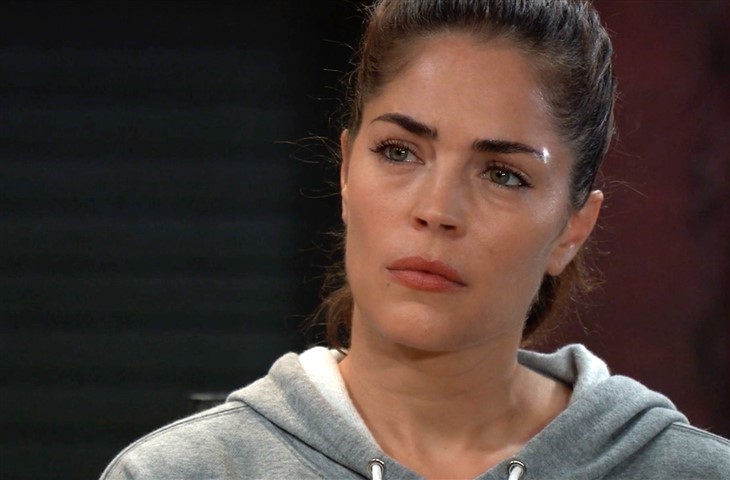 General Hospital spoilers tease that Dr. Britt Westbourne (Kelly Thiebaud) can no longer deny that her family legacy is finally catching up with her. As viewers know, Britt discovered over a year ago that she does indeed have the markers for Huntington’s Disease, which were passed on to her by her nefarious father, Cesar Faison (Anders Hove). Britt had known ever since that she would eventually become symptomatic and that the disease would ultimately take her life.

Jason Morgan (Steve Burton) encouraged Britt to have the tests done so she knew what she was facing. But Jason died a year ago and so Britt hasn’t confided in anyone else that her days are numbered. Of course, her mother Dr. Leisl O’Brecht (Kathleen Gati) is well aware of Britt’s diagnosis and has been as much of a support as she can be. But the one person Britt has kept her illness and who will be hardest hit is her best friend Brad Cooper (Perry Shen).

General Hospital spoilers say Britt and Brad recently made time to have a night out together. Britt even admitted to Brad that his aunt Selina Wu (Lydia Look) blackmailed her in order to get Brad to work for Selina instead of taking a position at General Hospital. Brad admitted he was happy working for Selina, so he forgave Britt. But Brad could tell something else was bothering Britt, but instead of telling Brad the truth, she insisted they go to the Savoy for drinks and dancing!

General Hospital Spoilers – Brad Cooper Will Be Devastated By The Truth!

Soon, Britt will have to leave Port Charles for treatment as Huntington’s symptoms get even worse. Hopefully, she will share the truth with Brad before she leaves town. Brad will be devastated of course. But he will want to stay strong in front of his best friend. He can’t do anything but wish her well as she takes off for parts unknown. But once she leaves, look for a helpless Brad to break down over not only the loss of his best friend but for the ordeal that she will be facing.

Will Britt tell Brad the truth before she leaves? Will Britt’s treatment be successful or is she gone for good? How much longer does Britt have left to live? Anything can happen in Port Charles so stay tuned to General Hospital airing weekdays on ABC. And don’t forget to check back right here regularly for all your General Hospital news, information, and spoilers!

Y&R Spoilers: Billy Tells Lily The Truth, Is There Still A Chance For Them?