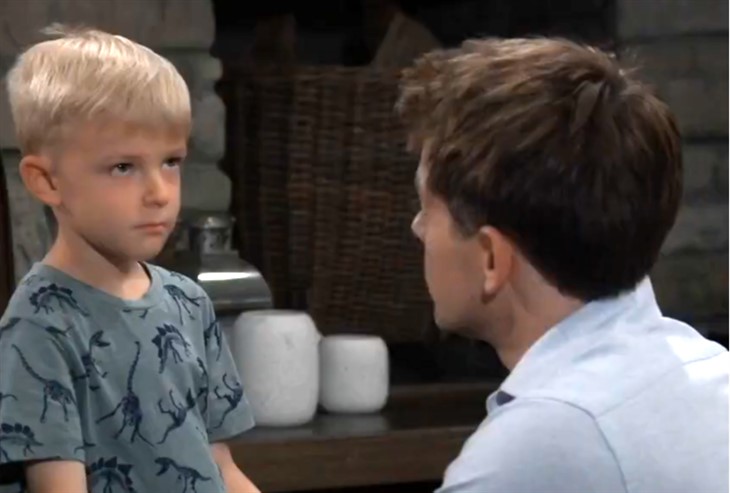 General Hospital Spoilers tease Wiley Corinthos (Viron Weaver) is getting a new sibling, and it’s not Willow’s baby! Fans may remember when Nelle Benson Jerome (Chloe Lanier) gave birth to baby Jonah Corinthos while on the run from the police. In a desperate attempt to escape jail tail after just confessing her crimes to Michael Corinthos’ (Chad Duell), she left him trapped in a vehicle crash to die and ran into the woods on foot.

Conveniently, as Nelle fled on foot into the nearby woods, someone else was making their way through the forest in hopes of hiding from the police as well — Liesl Obrecht (Kathleen Gati). The not-so-good doctor had escaped her prison transport and stopped to help Nelle, who had gone into labor underneath the trees.

There, baby Jonah was born, but what if he wasn’t alone? At any time after his birth, a twin could’ve arrived. Knowing this was a golden opportunity to keep at least one of her children from Michael forever, Nelle could have given the second baby to Liesl to hide away while Jonah was given to Brad Cooper (Parry Shen) and swapped out for baby Wiley who had just died from SIDS. Later, Nelle met her own fate when she fell off a cliff following a chase through the woods with Carly Corinthos (Laura Wright).

GH Spoilers — Liesl Obrect’s Lies Catch Up With Her

Nelle knew she wasn’t going to be able to take care of either of her babies. But what was Liesl’s role in it? Stopping to help Nelle give birth to her babies is something most doctors would do, but helping her hide one of them from the Corinthos family is a danger Liesl wouldn’t likely take on if there wasn’t something in it for her. But what could it be?

Since it’s unlikely Liesl tok pity on Nelle, it might be that she felt the child deserved a chance at a normal life outside the Corinthos compound and coffee imports. Or perhaps Liesl knew she could cash in on
the Corinthos millions someday if she delivered them Michael’s other child. Regardless of her reasons, Liesl may be calling her boyfriend, attorney, Scott Baldwin (Kin Shriner), soon for legal counsel.

The bad news is that Willow’s decision to delay cancer treatment might have spared her baby of side effects caused by it, but it won’t save her baby from side effects of a mother who is essentially dying while she’s growing a child. Willow’s baby may be born prematurely, and could need a life-saving transplant shortly after birth. Knowing her baby could die without it, Liesl may come clean and confess to stowing Wiley’s twin away for safe keeping — but where has she been keeping him for the last four years? Take your best guess and let us know where you think the mystery baby is. Stay tuned to GH every weekday and stick with us for more news, updates, and spoilers.