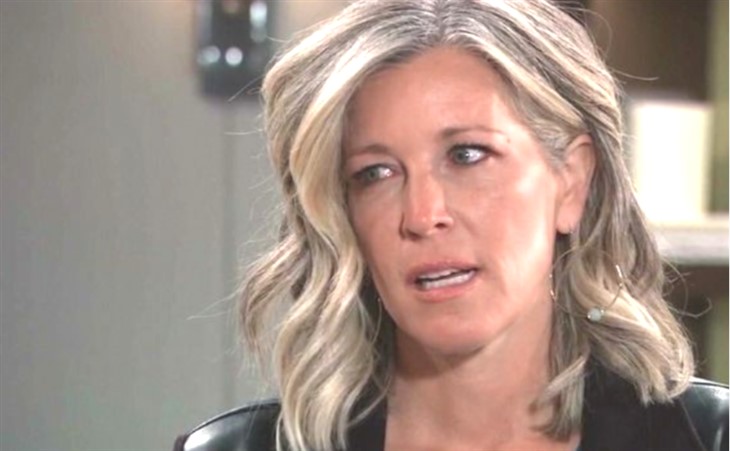 With Nina and Willow, Nelle was simply a nightmare, and she wasn’t there with them in the flesh to torment them. But even as an apparition in a nightmare, torment them she did; and worst of all, even little Wiley Corinthos (Viron Weaver) channeled Chucky in Willow’s nightmare. Like mother, like son, he thought Carly and Michael Corinthos (Chad Duell) dead and bloody on the floor was funny and he laughed.

But although a body was found after Nelle plunged off that cliff into a river below, it was never positively identified. So Nelle could be alive out there somewhere, and she might be the owner of that unfriendly face that Carly encounters.

Aruba is a small island in the Atlantic Ocean, in the tropics; but Carly’s plane doesn’t make it there. Between Port Charles, New York and Aruba, lie Cuba, Puerto Rico, and depending on the flight path, Bermuda; if she landed on Sonny Corinthos’ (Maurice Benard) private island she’d be safe.

But it doesn’t appear that she lands somewhere safe, it’s implied that she’s in danger from that unfriendly face, and who’d be more dangerous than an angry Nelle out for vengeance? If Nelle has been recuperating from grave physical injuries all this time and perhaps just emerged from a coma, you bet she’d be fighting mad. She could have floated out to sea and been picked up by someone who got her to a hospital on an island, similar to Nikolas Cassadine’s (Marcus Coloma) rescue.

Carly will take on a new fight with her adversary while trying to find a way to get back to Port Charles. She’ll face her past with Nelle, and possibly recreate that struggle on the cliff, since most islands in the tropics have plenty of cliffs and rivers. She may even be out of range to call for help, because surely if Nelle had a phone she’d have contacted someone in all this time.

The only friend Nelle might have had who’d have come to her rescue besides Nina would have been Ryan Chamberlain (Jon Lindstrom). If Carly doesn’t want her stowing away on her rescue boat or plane, she’s going to have to fight to the death!

Days Of Our Lives Spoilers: A Fall On Peacock You’ll NEVER Believe