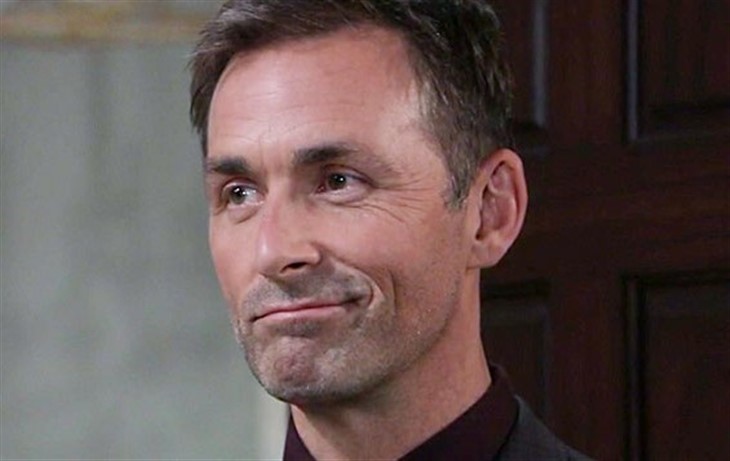 General Hospital spoilers tease that Laura Collins (Genie Francis) thinks she has the perfect plan to stop Victor Cassadine (Charles Shaughnessy). But she made the mistake of confiding in her brother, Martin Grey (Michael E Knight). Laura plans to have Victor deported because of his past crimes. But Martin works for Valentin Cassadine (James Patrick Stuart) and unfortunately, Valentin appears to have switched sides and is now working to help Victor!

General Hospital Spoilers – Whose side is Valentin Cassadine on?

Valentin was almost killed because of Victor’s alliance with Peter August (Wes Ramsey). Victor had Valentin beaten and then thrown outside a local bar. He suffered from a serious infection and had to be sent out of town to make a full recovery. The next time Valentin was seen he was apparently trying to frame Jennifer Smith (Holly Gagnier) for Luke Spencer’s (Anthony Geary) murder, taking his eyes off Victor for the crime.

Valentin’s allegiances are unclear at best. He seems committed to his romance with Anna Devane (Finola Hughes) but he’s being cagey when it comes to his priorities. When he returned to Port Charles, he seemed to be in support of his father. Now, this could be an act if Valentin is out for revenge for his illness. Or he might be coerced with some sort of threat against either himself or his family. There has to be a reason for Valentin’s sudden loyalty to Victor. Whether he’s being forced or doing so willingly, look for Anna to figure it out.

Now that he knows what Laura is planning, Valentin can warn Victor. Victor has connections of his own and may be able to stall, if not stop. His deportation. Or perhaps Valentin will see this as a way to finally get out from under Victor’s thumb and let Laura’s plan play out. Either way, will Valentin’s allegiance become perfectly clear in the coming weeks?

Has Valentin switched sides willingly? Or is he being forced? Will Laura succeed in her plan to have Victor deported? Anything can happen in Port Charles so stay tuned to General Hospital airing weekdays on ABC. And don’t forget to check back right here regularly for all your General Hospital news, information and spoilers!