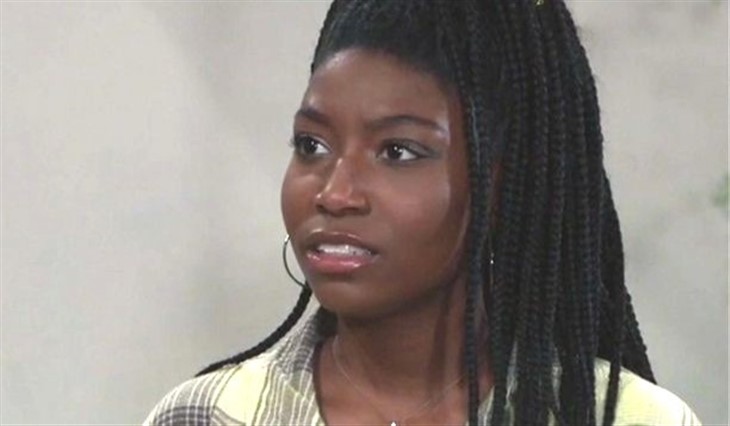 General Hospital Spoilers indicate Trina Robinson (Tabyana Ali) is up to no good, and no one will see it coming! The PCU student has had quite a year. Standing trial for making and distributing pornography without the filmed parties’ consent was enough embarrassment for Trina — even if she was found not guilty. Moving forward, she’s aiming to spare herself any further humiliation, and she’ll do so by keeping any potentially alarming or controversial details about her life — to herself!

Lies, lies, lies. That’s what Trina’s been telling herself, and everyone around her. She’s doing great; she’s never been happier, or so she says. One of her biggest secrets is that Officer Rory Cabrera (Michael Black Kruse) has really just been a fantastic friend and distraction for Trina for months. The entire time, her heart belonged to Spencer Cassadine (Nicholas Chavez).

Love is in the air, or so these budding adults would make it seem. While Trina is hiding her love for Spencer and trying to force feelings for Rory, Josslyn Jacks (Eden McCoy) is doing the same by hiding her growing affection for Dex Heller (Evan Hofer) while she’s still in a relationship with Cameron Webber (William Lipton). Trina and Joss are both lying to themselves, but somehow Trina will manage to feel more sympathy for Cam than she does Rory. When Cam confronts Trina and demands she tell him the truth about what’s going on with Joss and Dex, Trina will come clean and out her bestie, Joss — and she won’t tell Joss she did so.

Could secrets between Trina and Cam go even deeper though? What are the chances Trina is still into Cam after all? Will he return her feelings, or will he tell Joss the truth about her backstabbing best friend? After Cam comes to find out the truth about Joss’ feelings for Dex, he may be out for emotional revenge, and telling Joss he was into Trina would definitely be a shot to the heart.

Simultaneously, Portia Robinson’s (Brook Kerr) long-held secret about who Trina’s real father is will surface. The problem? No one else ever knew there was any question about who Trina’s dear old dad was. For as long as she’s been alive, she has called Marcus Taggart (Réal Andrews) her dad. Trina is about to find out her mom’s fiancé, Curtis Ashford (Donnell Turner) is actually her father. This mom and daughter are two peas in a pod! Continue checking back with us right here for more scoops and spoilers on what’s to come next for Trina and her family.