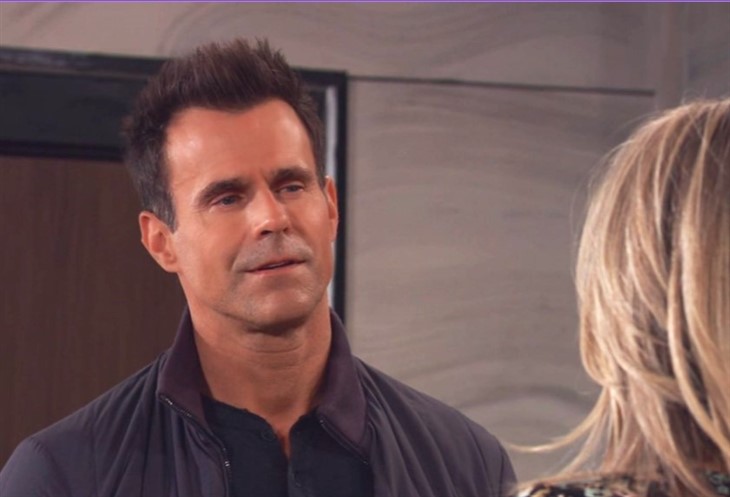 General Hospital spoilers and updates tease in this week’s Sneak Peek that Carly Corinthos (Laura Wright) shares that she’s having trouble sleeping over the Jacksonville cemetery situation. She tells Drew Cain (Cameron Mathison) that she’d like to work with Attorney Diane Miller (Carolyn Hennesy) in her fight against the Jacksonville Beautification Guild, but Drew has bad news.

Still in Jacksonville, Florida, Carly tells Drew that she couldn’t sleep last night, and Drew tells her he knows; he heard her tossing and turning all night long. Carly apologizes, and tells Drew she’s sorry, but she tells her she doesn’t have to be and asks her if she’s always such a restless sleeper. She admits that sleeping alone is taking some getting used to, which Drew responds to with a “hmmm”; after all Carly’s been having to sleep alone for a while now.

Drew says he could help with that, which causes Carly to look askance, wondering what he’s thinking about as he has been flirting with her a lot recently. He realizes what she’s wondering and says he didn’t mean like that, and they both laugh.

Drew continues, both of them laughing as he puts his foot in his mouth saying he means he could and totally would in a heartbeat, but they’ve already had that conversation. He then explains himself, telling Carly that he had learned some techniques for getting to sleep quickly when he was in the service, obviously having regained some of his own memories.

Drew tells her the sleeping techniques he learned can help her fall asleep in less than five minutes, Carly acknowledging she could have used them last night. Then Carly tells Drew about the nightmare that she had last night, that her adoptive mother’s grave had been dug up and Peyton Honeycutt (Linda Purl) was laughing about it.

General Hospital spoilers show Drew reminds Carly that they’re not going to let that happen, having come up with a plan to give Peyton and the Jacksonville Beautification Guild some very bad press. When Carly told Drew that Peyton had convinced the Jacksonville City Council that the cemetery where Virginia Benson (Lois Nettleton) had been buried needs to be moved he was offended. Drew thought it egregious that a cemetery should be moved so a parkway could be built for beach access to the rich and self-important of Jacksonville.

Carly then tells him how much he appreciates him offering to help but she thinks she should just call Diane Miller (Carolyn Hennesy) to see what her legal options are. Drew grabs her arm before she can grab her phone, and with a serious look says “About Diane..” and Carly looks alarmed.